New amenities, including a basketball court and pergola structures with swings, are under construction at Old Settlers Park. (Haley Grace/Community Impact Newspaper)

For the past eight years, projects totaling $56.5 million have been in the works to improve Round Rock’s parks and trails. There are 14 active park projects in the design phase or under construction to improve the city’s green space and encourage residents to explore the outdoors.

In the 2013 bond election, voters approved the Round Rock trail and park improvement projects allocating millions to improve the city’s outdoor spaces. Round Rock Park Development Manager Katie Baker said while parks are often thought of as a place for the younger demographic to play, the department is also focusing on projects for adults to have fun, too.

From Old Settlers Park to trails across the city, there will be new greenery and routes to hike and bike.

During the pandemic Baker said she has seen an increased need for passive recreation, especially in Old Settlers Park.

“People were tired of being cooped up in their houses, and parks seemed to be the safest place for them to relax and recreate,” Baker said.
RELATED STORIES

• 11 events in Round Rock, Pflugerville, Hutto for April-May

• Masfajitas Restaurant opens in new Round Rock location, plus 3 other business updates

To determine what residents want to see with the future of their parks, Roger Heaney, with the Round Rock Parks and Recreation Department’s communications unit, said every year the city conducts a biennial survey through a second party company of a random sample of 550 residents.

“In the survey, and for multiple years now, residents have said they want more trails, connectivity and parkland,” Heaney said. “We take these results seriously and for the past several years have provided what our residents have requested.” 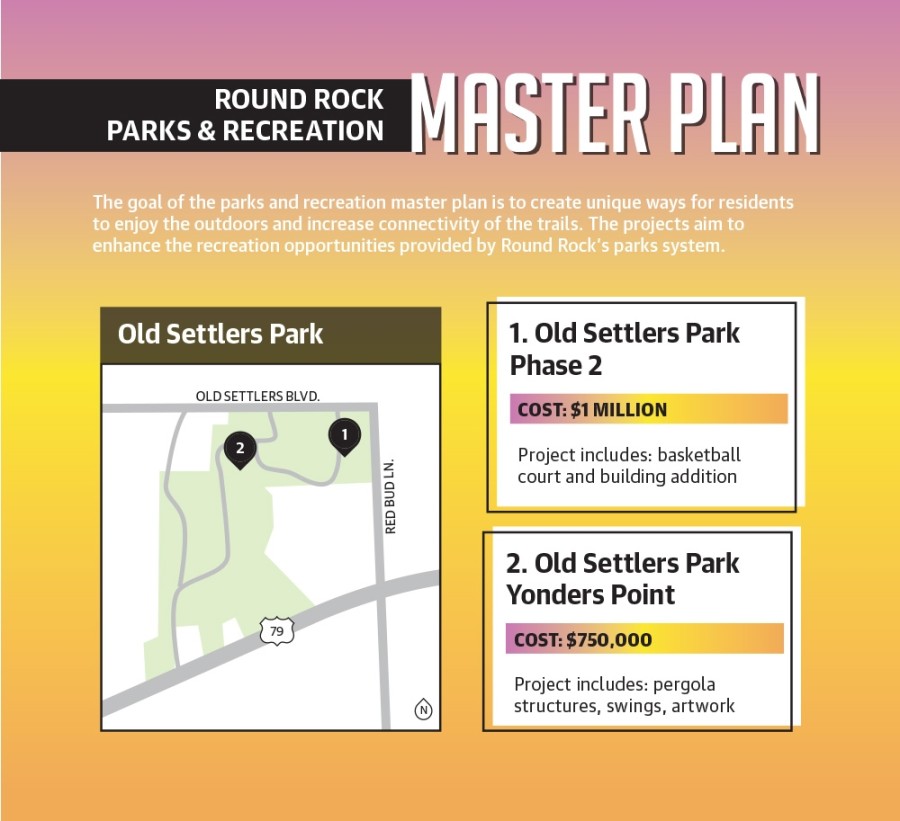 Next phase of construction

Round Rock City Council passed a resolution during the Feb. 25 meeting to approve the next phase of construction for the Old Settlers Park Adult Recreation Complex Basketball Court Project.

The first phase of the adult recreation complex was completed in March 2020 through $4.5 million in bond funds. The first portion included two softball fields, spectator seating and a bathroom.

Phase 2 of the project includes a covered basketball court and a building addition. Construction is expected to start in April and will be completed in June or July.

The building addition at Old Settlers Park is still under design. Construction is expected to begin in late summer or fall and is estimated to take up to six months.

“The addition will include a small concessions area designed to look like a silo, as well as reclaimed shipping containers with seating and TVs for patrons to hang out,” Baker said.

More projects on the way

The council also passed a resolution to purchase 67 trees from Better Trees of Texas for Old Settlers Park for $111,229.

“These are also trees that are being purchased out of the tree fund, so anytime we have construction in the city of Round Rock and they remove trees, they pay into the fund,” Director of Parks and Recreation Rick Atkins said.

Another project at Old Settlers Park with construction underway is at Yonders Point. Park Development Specialist Rachel Morris said this project will include the installation of pergola structures with swings.

“The vision of Yonders Point is to create a beautiful space for reflection and passive recreation, distinct from the active recreation currently offered by Old Settlers Park,” Morris said. 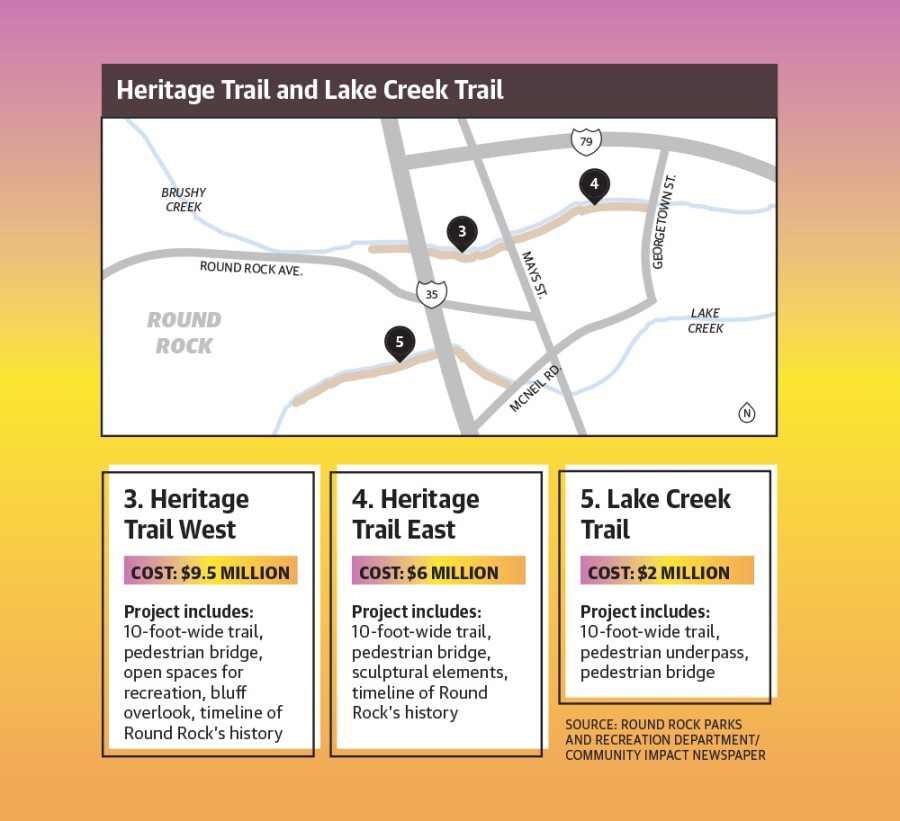 In addition to new park amenities, construction is underway along the trails to create new features for residents to enjoy.

Heritage Trail West is underway with an anticipated completion date of 2022. The project includes a 10-foot-wide trail with a timeline detailing the history of Round Rock since the 1800s in addition to a bluff overlook with views of Brushy Creek.

The Heritage Trail West project spans from Chisholm Trail Road to Mays Street. The trail’s site amenities will reflect the time period on the timeline and modernize as the user travels east.

“By interpreting the history of Round Rock along the trail, the city is able to let people know why it is special and foster community spirit and pride,” Baker said.

Another Heritage Trail project is under design on the east side to pick up where Heritage Trail West ends. Land acquisition is expected to be completed this year, and the project will be through permitting and out for bid by the end of the year.

The 10-foot-wide Heritage Trail East will continue telling the story of Round Rock from Mays Street, which represents the 1980s on the timeline all the way to present day commemorated at Georgetown Street.

This project is broken into two phases due to funding. The first phase will consist of building the trail connection. The second phase will require another bond election.

Another notable project is at Lake Creek Trail, which is in the permitting process and will be constructed after a city wastewater project is completed.

Round Rock resident Carlos Luz said he is looking forward to the upgrades.

“I feel like it’s important for our city to improve the parks and trail systems,” Luz said. “It is a vital part of our community to have these facilities available for the public to promote healthy living.”
Round Rock Round Rock Parks Round Rock trails Round Rock green space
SHARE THIS STORY