As more information on tornadoes trickles in, a clear picture of Williamson County's help efforts emerges

On the evening of March 21, several tornadoes touched down throughout Central Texas in cities including Hutto, Wimberly, Elgin and Granger.

One of the areas hardest hit was in Round Rock, where several dozen businesses, hundreds of homes and numerous vehicles were either damaged or completely destroyed by a tornado that took a northeastern path for several miles, starting at the I-35 and SH 45 N interchange and moving up past Hwy. 79.

Minutes later, the same tornado damaged several homes under construction and other property in Hutto before making its way all the way to Granger in northeast Williamson County.

Two days later on March 23, Round Rock was abuzz with activity.

The residential roads hit by the tornado became congested, packed with various types of repair vehicles.

“When [the tornado] hit, I mean, we didn’t have time. It was just, it was so quick,” Round Rock resident Lindsey Topolski said March 22.

Topolski’s home took a massive amount of damage—the tornado crushed her garage with her car still in it, and the top of her house is nearly gone.

In the days after the violent weather subsided, state, county and local officials began assessing the scope of the destruction.

At that time, relatively few details emerged about the breadth of the devastation, but Abbott issued a hopeful statement to county residents.

“We know that you have faced a devastating storm ... with multiple tornadoes ripping through Williamson County alone,” Abbott said. “We know there are many people whose lives have been completely disrupted. People have lost their homes. Property damage is devastating. It’s a loss. But if you are alive—you can rebuild that property.”

On March 22, after crews surveyed the Round Rock and Granger areas most heavily affected by the tornadoes, Gravell said about 1,000 homes were damaged or completely destroyed in Williamson County.

The same day, officials from Round Rock and Williamson County issued a disaster declaration. Round Rock Mayor Craig Morgan urged people to avoid areas hardest hit within the city so crews could continue clearing debris and repairing downed power lines.

Additionally, Gravell said more than 15,000 residents were without power as a result of downed power lines caused by the tornadoes. However, by March 24, about 170 people in the area were without power, according to data from local energy provider Oncor.

Though no other campuses closed the next day, acting Round Rock ISD Superintendent Daniel Presley in a statement said an extended power outage caused a one-day closure at Callison Elementary School.

Calling it a “March miracle,” Gravell said no deaths or serious injuries were reported as a result of the storm.

Affected areas in Round Rock and Hutto

By March 23, the National Weather Service classified the tornado that swept through Round Rock and Granger with wind speeds up to 135 mph as an EF2 on what is called the Enhanced Fujita Scale.

According to the EF Scale, an EF2, which is the third most powerful on a scale from EF-0 to EF-5, brings winds up to 157 mph, destroys trees and mobile homes, turns large objects into projectiles and rips the roofs off of houses.

Williamson County has had its share of destructive tornadoes.

NOAA data states the most destructive tornado in the area was an EF5 that hit Jarrell on May 27, 1997, killed 27 people, injured 12 others and resulted in $40 million in damage.

The March 21 EF2 tornado hit numerous homes, businesses and automobiles in Round Rock along a northeastern path from its touchdown near the interchange between I-35 and SH 45 N to eastern segments of Hwy. 79, including Eli’s Roadside Produce Market. 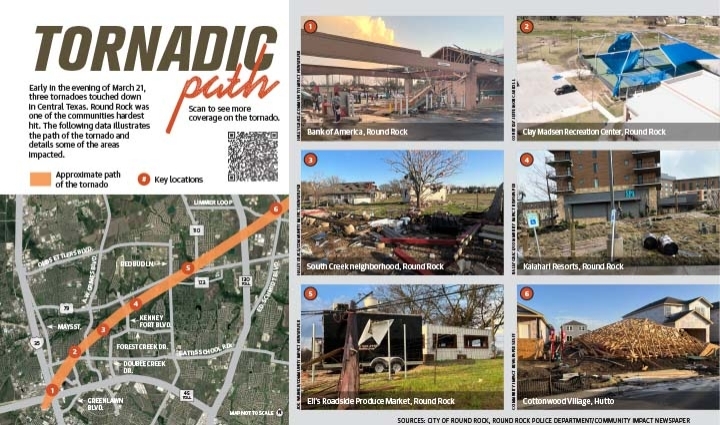 Official figures are not in as of press time, but at least 35 businesses experienced damages. Kalahari Resorts, which closed March 22-25, was one of the largest local businesses hit.

The Round Rock Police Department reported one vehicular accident as a result of the tornado—an overturned 18-wheeler on SH 45 N near its interchange with I-35. The tornado damaged or destroyed many parked vehicles, but RRPD public information officer Nicholas Olivier said the department has not tracked that figure.

The Chili’s Grill & Bar and Bank of America locations within the Boardwalk shopping center near the I-35 and SH 45 N interchange withstood extensive damage and are still closed as of press time.

Farther east in Hutto, city staff confirmed that in at least one neighborhood—Cottonwood Village—the tornado leveled several new homes under construction, but beyond that, damage was minimal.

In areas along the tornadic path, residents and other agencies began responding to and assessing the damage as soon as the weather cleared.

On the evening of March 21, the city of Round Rock set up two shelters at United Heritage Center at Dell Diamond, located at 3400 E. Palm Valley Blvd., and Redbud Elementary School, located at 1500 Ty Cobb Place.••Four families ended up staying in the two shelters that night, according to city information. 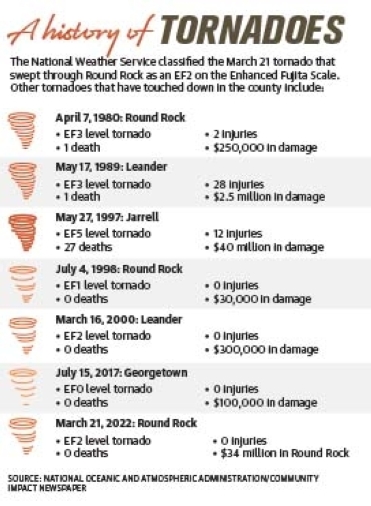 At the United Heritage Center at Dell Diamond, city of Round Rock workers collected donations for victims.

Also at the Dell Diamond facility, the Austin Disaster Relief Network organized a multiagency resource center that ran for three days from March 24-26. Along with the ADRN, groups including the Red Cross and Catholic Charities provided assistance.

Round Rock residents also came together to help their neighbors for the next several days following the March 21 tornadoes.

As one example, in the neighborhood of South Creek where dozens of homes were damaged or destroyed, resident Tammy Crespo said she was lucky. Her house had only minor damage.

Crespo recognized how helpful everyone in the neighborhood was being—checking on each other and making sure everyone had enough food, water and other supplies.

Kevin Rutledge, who lives across a small creek from Crespo but still in the South Creek neighborhood, was not as lucky.

The tornado obliterated the back of his house, destroyed his fence and landscaping, and lifted his wife’s workshop—a portable shed in the backyard—off the ground and pushed it across the yard.

While assessing his property damage March 22, Rutledge’s neighbors repeatedly asked him if he was okay and if he needed anything, and he reassured them all that he was alright.

Like Crespo, Rutledge noted the helpfulness of neighbors, and how willing they all were to provide what they had to those who may need it more.

“Something about Texas, you know?” he said. “And, I’m a native Texan, and that’s what Texas just does. They just come out and help the neighbors and show up.”

Brooke Sjoberg and Claire Shoop contributed to this story.