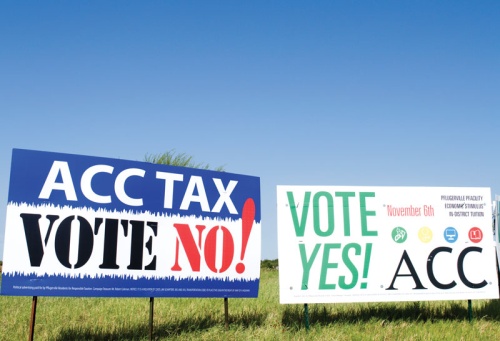 Update 10:15 p.m. Kevin Pakenham, spokesperson for Pflugerville Residents for Responsible Taxation, a group that led efforts opposing Pflugerville ISD's annexation into the Austin Community College district said he was pleased with the effort that went in to opposing the proposition.

"Regardless of the outcome, we’re happy about the impact we’ve had," Pakenham said. "From day one we’ve been an absolute grass roots campaign about getting the message out about what a bad deal that ACC proposed with this annexation. We want to thank all the supporters, volunteers and voters."

Tammy Smith, chairwoman of Pflugerville Pfriends 4 ACC, in support of annexation said she worries that the results of this election will leave Pflugerville ISD behind other area districts.

"We are disappointed," Smith said. "Education is at the core of success for a person and community. When no one is left behind, we all get ahead. With this loss, Pflugerville will get left behind. The ISDs of Austin, Round Rock, Leander, Manor, Elgin, Del Valle and Hays have already joined ACC. Their students and workforce benefit greatly from the tuition reduction. This is a huge blow for Pflugerville; one that I hope we can recover from, but not a long time."

Update 9:24 p.m.: Pflugerville ISD residents have rejected Austin Community College's annexation proposal, according to Travis County election returns. With 93.71 percent of votes recorded, the measure was rejected by 53.45 percent of the vote.

If annexed into the ACC district, PfISD residents will see a median increase of $268.63 in property taxes and a decrease of about $3,312 per semester, if enrolled in the college.

Election Day results are expected to come in shortly after 7 p.m. Community Impact Newspaper will update results as they continue to come in.

The results, as reported by Travis and Williamson Counties, are unofficial until canvassed.