Study will determine the future of SH 45 frontage road gaps 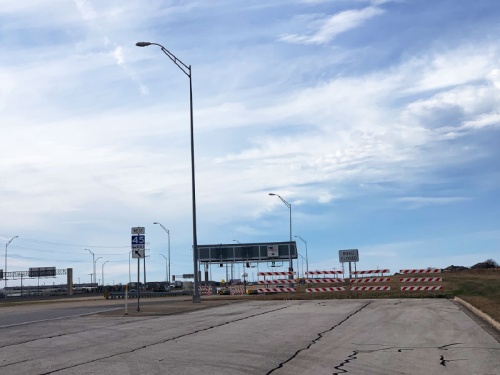 Future plans for the SH 45 frontage road ngaps between Heatherwilde Boulevard nand Donnell Drive could be determined nby an impending study from the Texas Department of Transportation.

Ann Holmes moved to a townhouse just north of SH 45 near the intersection of Donnell Drive and High Country Boulevard about a year and a half ago. She said when she purchased her home she was told by her real estate agent the missing SH 45 frontage road nearby would be filled in soon.

“I probably would not have bought a home here knowing that I [still] don’t see [the frontage road project] happening any time soon,” Holmes said. “It’s horrible.”

The gap exists between Donnell and Heatherwilde Boulevard on both sides of the SH 45 toll road.

For Holmes, simple trips to the Stone Hill Town Center—just two miles from her house—require her to either take a lengthy trip through surrounding neighborhoods or get on the toll road.

Holmes is not alone. Traffic regularly backs up on the roadways surrounding the missing frontage road.

“If we decide to leave during a rush hour it takes us forever to get out [of the neighborhood],” Holmes said.

Round Rock Director of Transportation Gary Hudder said that piece of the road was never constructed when the toll road was completed in 2006.

Hudder said that although the portion of the roadway lies in Travis County and Pflugerville city limits, the cities of Pflugerville and Round Rock came to an agreement that Round Rock would take the lead on the project to fill in the roadway.

“The region is what is impacted by the missing frontage road,” Hudder said. “Round Rock is impacted, and our residents are impacted.”

Round Rock City Council on Jan. 10 voted to fund a study with Pflugerville for the Texas Department of Transportation, which owns the toll road and frontage road, to perform a traffic and revenue study.

Hudder said in the last year and a half the two cities have conducted some preliminary design work for the project and have begun work with TxDOT. The traffic and revenue study represents the next step in
the process.

“Pflugerville has actually had a lot of economic development along those pieces of the frontage road, so this becomes very critical to them,” Hudder said. “For us it is a convenience and traffic-management tool.”

The total cost of the study—just over $61,000—would be split with Round Rock and Pflugerville, according to Hudder. The study would be conducted on behalf of TxDOT, and would determine the potential revenue impact the project could have on the toll road.

“The way the toll structure is set up is they have bond holders that fund toll projects, and then the way they get reimbursed on those bonds is through revenues that the toll system generates,” Hudder said. “Whenever there is something this significant
that could impact that revenue stream, they are obligated to do a revenue study.”

Hudder said the study will identify any potential revenue impact to the main lanes of the toll road.

“Now we get to this point ... where there could potentially be a revenue implication that would have to be resolved in some way,” Hudder said.

If the study indicates a negative revenue impact to the toll road, Hudder said TxDOT could prevent Round Rock and Pflugerville from carrying out the project unless a plan is put in place to reimburse the lost toll funds.

“It could not happen,” Hudder said. “More than likely, after we get through this ... process with them, Round Rock and the city of Pflugerville will have a decision to make ... [as to] how much it is going to cost to make the connection, which would include full design, construction … as well as potential revenue impacts that we would be obligated to take care of.”

Although the outcome of the study has the potential to sideline the project, Hudder said he is optimistic that it will move forward.

“The outcome [of the study] probably is going to be that [TxDOT] will determine that we can move forward but at what cost,” Hudder said. “It will be an economic decision at that point.”

“I am hopeful that by the end of this calendar year we will be through the TxDOT toll process and have pretty clear direction as to whether we want to move forward,” Hudder said.

Should the project move forward, the cities of Round Rock and Pflugerville will be responsible for funding the frontage road improvements.
SHARE THIS STORY