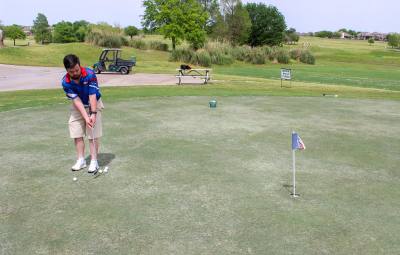 William Mullican is used to setting records. He became the first Pflugerville athlete to go to the Special Olympics USA Games in 2014. Just last month, he won a silver medal in golf at the World Games in Abu Dhabi.

Mullican plays for Pflugerville ISD in level 2, nine-hole unified alternate shot golf with his golf partner, Matt Rueter. Unified golf is an inclusive sport that pairs a Special Olympics athlete with an individual without disabilities as teammates for training and competition. Mullican and Rueter are no strangers to the Special Olympic stage; last summer, the two won a gold medal from the Special Olympics USA Games in Seattle.

Sports became a part of Mullican’s life at an early age. His mother, Tammy, encouraged Mullican to start golf at 8 years old. Fourteen years later, the 22-year-old currently plays golf and basketball. Throughout his time in PfISD, he has competed in gymnastics, football, soccer, swimming, track and field, and bowling.

When it comes to golf, Mullican said growing up around the sport got him into the game to begin with.

“I really love it,” Mullican said.

Before he made it to the international stage in Abu Dhabi, Mullican’s coach, Amy Wiesenhutter, recalls taking Mullican’s picture at a track meet. She said watching Mullican develop athletically and socially is the biggest accomplishment he has given her.

“He’s been a true leader for the athletes in our program,” she said.

In light of Mullican’s athletic accolades, he said “playing with Matt Rueter” is his favorite part of the game.

Rueter said playing golf with Mullican over the last three years stands out in his own life experiences.

“I have met some really interesting people, and I’ve done some interesting, cool things,” Rueter said. “But playing golf with William, at the level we’re playing and meeting all the different people we’re playing, is the coolest thing that I’ve ever done.”

“To watch the relationship that he has with Matt. [...] It’s not just a friendship; it has the strength of a family connection,” Bill said.

Mullican’s mother said the social element of competing is a big part of his love for sports. So much so that Wiesenhutter said his previous unified partner gave him the nickname “The Governor.”

“It’s just so fitting,” Wiesenhutter said. “Because everywhere he goes, he knows everybody, and everybody knows him.”

Wiesenhutter said Mullican’s discipline for sports transitions off the field. While completing his last year of high school, Mullican also holds jobs at H-E-B and Russo’s New York Pizzeria. He said managing these facets of his life is “easy,” especially working at pizzeria, which inspires his dream to open his own restaurant one day called William’s Place.

While describing his future plans, Mullican said golf will always be a part of his life, and he hopes to coach the Special Olympics himself one day.
SHARE THIS STORY