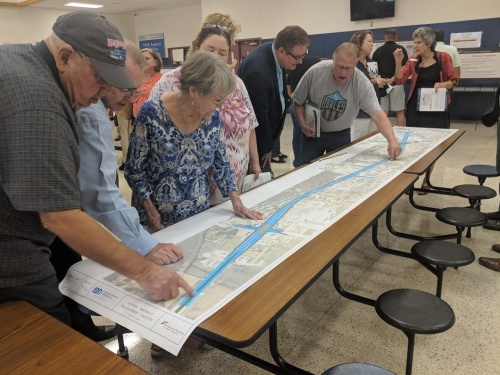 TxDOT and county officials previewed a Hwy. 79 widening project to the public Aug. 23.

TxDOT officials Thursday night invited the public to view and provide comment on an extensive plan to alleviate traffic congestion along Hwy. 79 by 2024.

The undertaking, as proposed Thursday night, will ultimately add several lanes of traffic to widen the arterial highway through Round Rock. It will also add options for half-clover traffic patterns and innovative bridge infrastructure not currently found in Central Texas, per TxDOT officials.

The widening project is necessary to handle climbing traffic counts as development in Williamson County—particularly along the Hwy. 79 corridor—continues to spring up.

“Residential traffic all through that corridor has increased, as well,” said Bobby Ramthun, area engineer for TxDOT.

Ultimately, the proposed project will widen Hwy. 79 by adding a third travel lane in each direction. Some sections of the roadway will have eight total lanes of traffic—not counting turning lanes. The widening project will stretch from Sam Bass Road to east of A.W. Grimes Boulevard in Round Rock.

The bridges, called single-point urban interchanges, are new to the Central Texas region, according to TxDOT officials.

A project sheet provided by TxDOT states the project will be partially developed with federal funds and is subject to compliance with the National Environmental Policy Act. A total project cost has not been outlined for the proposed Hwy. 79 widening construction.

According to a timeline presented Thursday night, TxDOT is currently conducting environmental studies on the project. Those studies will run through 2019. TxDOT would begin right-of-way acquisition at some point in 2019, given the agency receives environmental clearance and funding for the project.

Ultimately, TxDOT wants to begin the project in 2022 with an estimated two-year estimated completion date.