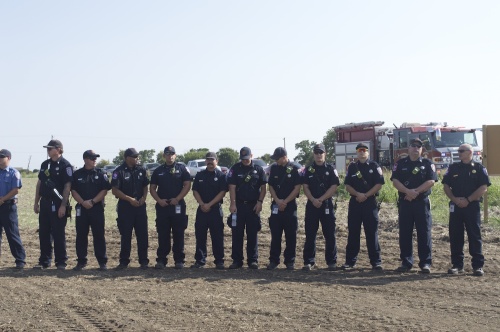 The second Hutto ESD station is situated on Swindoll Lane off FM 1660 in the southern end of Hutto city limits. Kerwood contends the new station—named after longtime Hutto firefighter Vic Stern—will help serve residents on the south side of the train tracks that run along Hwy. 79 by expediting response times.

“This station fulfills a desire from the community for a long time for a station south of the tracks," Kerwood said.

The new Vic Stern Station is possible in part due to partnerships with Williamson County, Hutto ISD and the city of Hutto, according to Kerwood. Williamson County EMS ambulances and personnel will be housed in the station and the site is situated next to Ray Elementary School. Hutto Fire Rescue and HISD have coordinated designs for future stations near school sites.

The new station is paid for with revenue from a sales tax implemented by Williamson County ESD No. 3 in 2016. Hutto Fire Rescue collected nearly $2 million in sales taxes from October 2016 to September 2017, and it projects to collect $1.78 million by this September.