Round Rock railroad crossings on track to become quieter 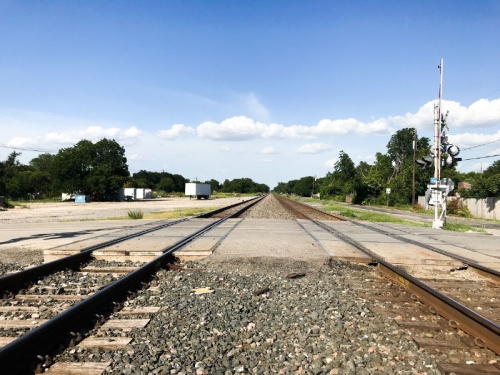 The city of Round Rock is working with Union Pacific Corp. on creating and expanding two crossings near Palm Valley Boulevard.

Since moving to downtown Round Rock about a year ago Kelsey Tucker said she hears and feels trains pass her house between 10 and 15 times each day depending on when she is home. Tucker said she has grown accustomed to the vibrations from the passing trains, but the horns remain bothersome.

“It’s not too loud that you can’t have a conversation over it, but you can still hear it over the TV,” Tucker said.

Fortunately for Tucker and her neighbors construction is set to begin in August on a project that could allow trains to pass through the city without sounding their horns.

According to the Federal Railroad Administration, train engineers must start sounding their horns at least 15 seconds in advance of all public crossings. In “quiet zones” safety precautions at railroad crossings are enhanced so trains are no longer required to sound their horns unless the conductor sees a hazard on the tracks.

For a crossing to meet the standards to qualify as a quiet zone the city must install either a quad gate or raised median at the crossing, making it more difficult for drivers to cross the tracks once the gates are down. The quad gate involves four arms which would block the entirety of the roadway. The raised median option would involve two arms with the roadway raised between the two lanes, making it difficult for drivers to go around or through the arms.

“The goal is for the changes on the roadway to prevent people from crossing over the track when the arms are down,” said Gary Hudder, transportation director for the city of Round Rock.

The total project cost is about $3.1 million, $1.6 million of which will be supported by federal grants. Once the work at the crossings is complete an application will be submitted to Union Pacific Corp. for the crossings to be designated as quiet zones.

Round Rock has been planning the project for a number of years after requests from the public.

“As the community grows the train horns can become disruptive, especially out toward the east where it was a lot of farmland for years and the noise wasn’t a bother, but with the growth the noise has become bothersome,” Hudder said.

Initially the city planned to complete the project along the entire railroad line running through the city but decided to instead divide the project into two phases to keep it moving forward.

The first phase will involve crossings between County Road 172 and Burnet Street. Work on the first phase of crossings is kicking off in August with an anticipated construction timeline of 90 days, according to Hudder. Officials hope to complete the work and submit an application to Union Pacific for the quiet zone designation by the end of the year.

Hudder said that some of the crossings—such as the one at St. Williams Street—will require more work than others and that drivers may expect temporary lane shifts or crossing closures, but no major transportation impacts in the project are planned at this point.

Once the city completes the second phase of work it will submit applications to Union Pacific for the remaining quiet zone designations.

Tucker said she and her neighbors look forward to the completion of the project and a little more peace and quiet in their downtown Round Rock homes.