Pflugerville Area Fire Department turns up the heat on training 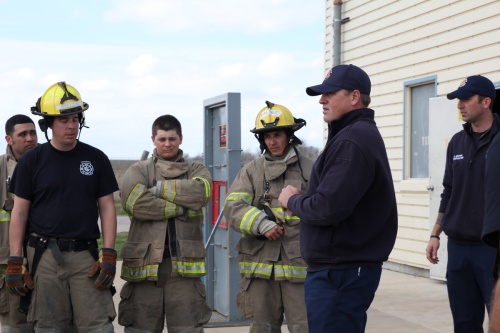 Officers instruct recruits on proper procedure during a training exercise for the Pflugerville Area Fire Department. The department is running exercises in a training facility east of SH 130 aiming to help 13 firefighters with a range of experience join the department by meeting  physical and classroom performance standards.

“There aren’t many departments that have facilities like this,” recruit Chris Wolff said. “It’s really a testament to the commitment to training. The biggest reason why I decided to come here is I live in the area, which is covered under fire station No. 2. My background working in small communities, for my neighbors, is the course I wanted to continue; I was going to do a service for the community, and I wanted it to be my own.”

Officials said firefighters train every day of the year for optimal readiness; however, the initial month-long training session is particularly challenging.

When training is complete, the group will increase the department’s staffing from 72 to 85 and improve overall safety standards by allowing four-man crews, instead of three, to respond to emergency calls. Firefighting officer and training captain Ram Beck has worked for the department for 16 years and said this class will help fulfill local needs and assist the department in meeting national performance recommendations of having four firefighters per truck when out on a call.

“I think [the large class] shows that Pflugerville’s grown not only as a city, but out in the county,” Beck said. “It’s going to do a number of things for the department—we’re trying to get that recommended minimum staffing criteria—four-man staffing per engine—so this is going to help us get to that level. Once we do that, it’s going to make things quicker, and safer, by having more guys on the truck and make things a lot easier for the company officer on the scene.”
SHARE THIS STORY