A key to sustainable growth, according to Hutto city staff and elected officials, is to continue to annex land into the city limits. (Taylor Jackson Buchanan/Community Impact Newspaper)

Hutto boosts a resource many neighboring jurisdictions lack: an abundance of empty land. A key to sustainable growth, according to city staff and elected officials, is to continue to annex land into the city limits.

As it stands, the city limits of Hutto span just over 8,000 acres. Comparatively, four times as much land—more than 32,971 acres—are included in the city’s extraterritorial jurisdiction, the unincorporated area designated for possible future annexation.

As a Hutto City Council Member and liaison to the city’s planning commission, Peter Gordon said he believes annexations with specific projects in mind help bring new jobs, entertainment and commercial opportunities to the city. Gordon said he supports diversifying Hutto’s tax base while also invigorating its workforce with prospective job opportunities. Those opportunities, he said, come through development.

“I’m definitely one of those councilmen that really wants to see more commercial, more manufacturing, to help diversify our tax base so that all of the burden isn’t on just the homeowners and just the citizens," Gordon said. 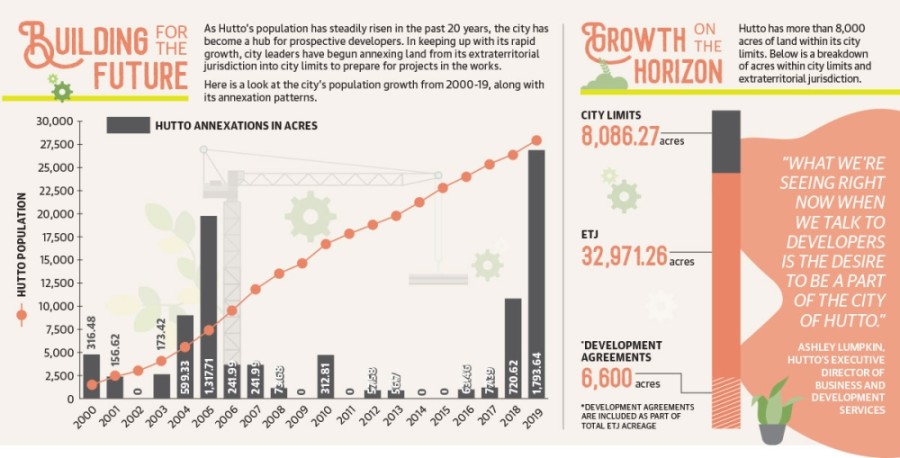 In 2017, the city of Hutto outlined a set of “magnificent seven” projects to ease tax burdens on residents through commercial perspectives and increased quality of life factors. The list included Innovation Business Park and the Co-Op District, both of which are constructed on land now within city limits that aim to accommodate demands from Hutto’s growing population. Innovation Business Park's land was annexed in 2017, while the city purchased the Co-Op District's land in 2003 with intentions to develop the site.

When it comes to strategy, Ashley Lumpkin, executive director of business and development services for the city, said annexations are typically planned with specific projects in mind. Lumpkin cited the 2018 acquisition of a 65-acre property, which now serves as home to the Brushy Creek Amphitheater, as an example.

On May 24, 2019, House Bill 347 went into effect in the Texas State Legislature. This law now requies landowners or voters to approve annexations before they occur. Lumpkin said that most annexations completed prior to the law going into effect had been voluntary, adding she does not anticipate any slowdown in annexation requests.

A core component of annexations, Gordon said, is the location of prospective development sites in relation to neighboring communities. Annexations require attention to not only what quality of life factors the proposed project will bring, Gordon said, but also that the city holds up its end in providing necessary services to the site. In cases where the city supports the project despite not being within city limits, some service accommodations are available through development agreements.
Development agreements vary. An agreement might stipulate that a landholder will apply for annexation when they begin the development process, according to the Texas Municipal League. For some residential subdivisions, the city might agree to oversee lot sizes and density, but not annex the area fully into the. city.

“We really want to only annex what we know that we can take care of, but we don’t want to get ahead of ourselves and just annex everything right now,” Gordon said.

Both Gordon and Lumpkin said that as the city continues to grow, updating Hutto’s comprehensive plan accordingly is a necessary step in cementing future initiatives. The last major overhaul of the plan was done in 2015 with a minor update in 2019, Gordon said, adding that a strong comprehensive plan is the cornerstone of Hutto’s future land use development.

“The city is really trying to take a very mindful approach, especially because the potential for growth in the [Austin] MSA is so explosive,” said Jennifer Atkinson, communications specialist for the city.

She added: “We’re not trying to grow willy nilly, and council, the planning department and development services are trying to make the best decisions for the long-term resilience of the city.”

Editor's note: The story has been updated to clarify a council member's personal position on annexations.