The code amendments would apply to the downtown district overlay, a geographic area ranging from FM 685 to West Pecan Street that is divided into several neighborhoods and subdistricts, which aim to define strategic areas for development. (John Cox/Community Impact Newspaper)

The city of Pflugerville will host a series of public hearings this fall regarding proposed downtown code amendments. The public hearing follows discussions hosted July 15 and Aug. 19 between city leaders and downtown residents. At the meetings, citizens expressed concerns over potential issues with commercial businesses inhabiting traditionally residential spaces.

The code amendments would apply to Pflugerville’s downtown district overlay, a geographic area stretching from FM 685 to West Pecan Street that is divided into several neighborhoods and subdistricts, which aim to define strategic areas for development. Amendments under consideration would not rezone properties in the downtown district, Planning Director Emily Barron said during Pflugerville City Council's Sept. 8 meeting. 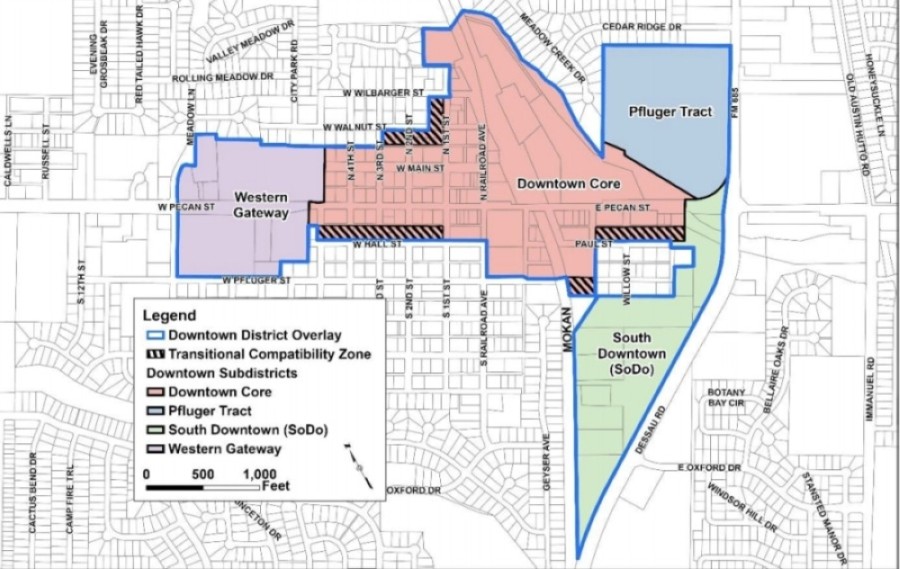 Barron added the city is in contact with more than 70 residents regarding the proposed amendments. Following resident feedback, Barron said Sept. 8 the following modifications have been made to the amendments:


The transitional compatibility zone would include a more distinct residential character to help ease the progression between residential core areas and surrounding commercial and retail development opportunities, Barron said.

Council Member Jeff Marsh added the primary goal of the downtown district overlay is to preserve the historic integrity of the downtown corridor. Barron confirmed to council the code amendments would apply to future development and redevelopment opportunities only and not affect current properties.

The adoption schedule for the amendments is as follows: