Future of historic Pflugerville home to be shared with community 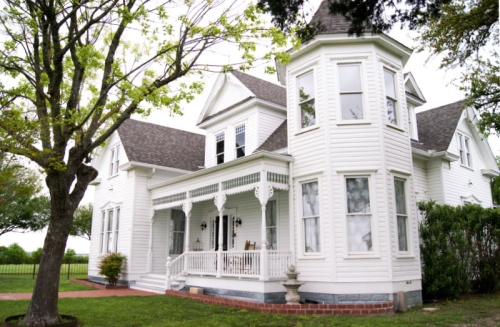 On April 15, Debby Krueger opened her family home to the public for an open house showcasing the house’s potential as an event venue. For three years leading up to the open house, Krueger had been renovating the 114-year-old home, known as the Kuempel Haus, restoring its original characteristics in an effort to preserve its history.

Krueger’s grandfather, George Kuempel, built the house in 1904. Since then, generations of her family have lived in the home for all but three years. In 1987, the Texas Historical Commission recognized the Kuempel Haus as a historical landmark, noting its unique architectural features.

In 2015, Krueger moved into the house and began to renovate it, restoring many of its historical features. Krueger said that most of the changes she made were made cosmetic—such as removing carpet and wallpaper that had been installed over the years —returning much of it to its original form.

One such change took place around the stairwell in the center of the house, where an archway and rounded landing had been covered up when a bathroom was installed in the 1940s.

“As we uncovered some of these features, I just felt like I was finding gold,” Krueger said.

The house has also served as a set for films like “Elvis and Annabelle” and “The Best Little Whorehouse in Texas,” which premiered right in the pasture right in front of the house in 1982.

“I feel like I’m a steward for this place,” Krueger said. “I get to live here, but I also get to share it with people and that’s what I think is important.

Over the years the Kuempel Haus has hosted events for not just Krueger’s family, but for the entire community. Krueger hopes to officially open the property as an event venue in the coming months.

“With the world taking away all of the farmland, I think it’s important to try to keep some of that land so people know what a pasture looks like,” Krueger said. “There are a lot of different things that can happen here, so I’m excited about it.”