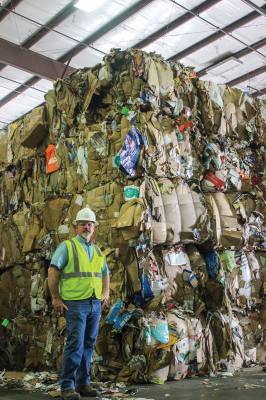 Recycling centers in Round Rock, like many across the United States, are dealing with a surplus of recyclables following China's adoption of a strict importation policy.

Every other week, a Round Rock Refuse truck drives through neighborhoods to collect recyclables placed on the curb. The truck then takes the materials to a single-stream recycling center. Round Rock households currently pay around $20 a month for this service, but a recent downward trend in the commodity market could make recycling more expensive.

Andy Andrasi, business development and recycling site manager for Round Rock Refuse, said the industry regularly sees dips in price based on supply and demand, and this flow leads prices to peak and bottom out every 18-24 months. However, a policy introduced in China last year disrupted normal ebbs and flows of the cycle.

In January 2018, China began enforcing a “National Sword” policy that banned imports of 24 types of solid waste, including several plastics and mixed papers. The policy also created strict contamination level limits. As a result, Andrasi said there is an oversupply of recyclable materials in the U.S.

“We haven’t lived through something like this before,” Andrasi said.

Michael Thane, director of utilities for the city of Round Rock, said the city’s third-party contract with Round Rock Refuse works to protect the city during these low points with no risk.

“The city of Round Rock only benefits when the markets are good,” Thane said.

Thane explained, however, if the current trend persists, the surplus of recyclable materials may be directed to a landfill as the more economical option—even if it is not the environmentally friendly answer.

“With the markets down now, that could be a problem for recycling in the future,” Thane said. “You can only sustain it for so long if the cost of recycling is so high and you’re not getting your revenues.”

“Ultimately, it’s going to become more of a cost to the communities versus a potential rebate-type situation,” Lavengco said.

Commodity value for recyclables was much higher around six to eight years ago, resulting in positive rebates, Lavengco said. However, he said rebates have dipped since —and if continued, could come at a cost to the environment and Round Rock residents’ wallets.

“The cost of recycling may overtake the cost of taking it to the landfill,” Lavengco said. “And the consumer is going to make the choice of whether they want to pay more to recycle.”

Andrasi said the sorting process can be slowed by strict quality specifications like those put in place by the “National Sword” policy.

“The processing equipment must be slowed down to accommodate the sorting functions to remove contaminants,” Andrasi said.

Whether new capacity is built overseas or domestically, Andrasi said each component of a recycling stream has its own supply and demand economics.

As the recycling commodity market faces an uncertain future, Thane urges the community to continue recycling regardless. He said reduction in recycling would still impact trash-disposal costs due to rising landfill expenses.

“People need to continue to recycle,” Thane said. “It is the right thing to do. It’s the environmentally correct thing to do.”
SHARE THIS STORY