When Round Rock ISD transitioned to virtual learning in the spring, Chrissy Weber noticed changes in her son, who is diagnosed with autism and an intellectual disability.

“He’s having more difficulty with transitions and change because his world has been narrowed down to being at home,” Weber said.

Weber's son was one of nearly 7,500 RRISD students who received special education or dyslexia services during the 2019-20 academic year. While real-time learning—a change from the spring—will provide more one-on-one instruction, Weber said virtual learning still is not realistic.

"It's not even remotely within his reality, not for a lot of autistic kids in particular," Weber said.

Marie Gonzales, RRISD’s executive director of special education, said most students in special education do not receive a separate curriculum overall, but rather an extension of general education courses. In an email to Community Impact Newspaper, she said RRISD is committed to students’ individualized education programs, or IEP, plans, as well as 504 accommodations for conditions such as dyslexia. 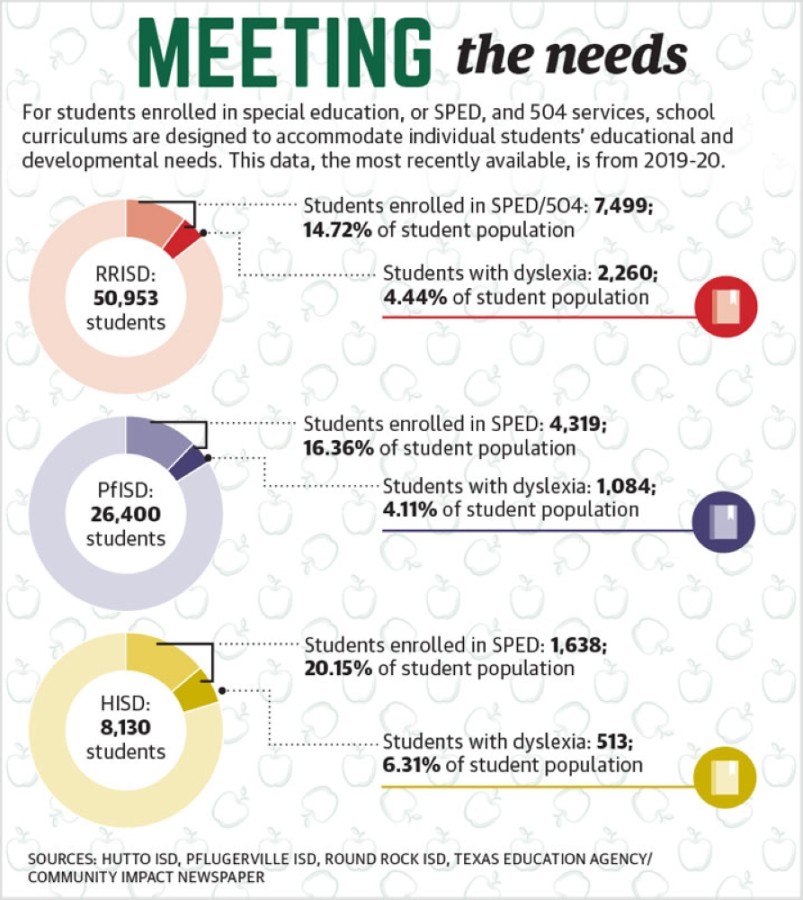 • UPDATED: Multiple roads close in Round Rock due to flooding

• Bored at home? These 5 businesses offer socially distant entertainment in Round Rock, Pflugerville

“Special educators are passionate, dedicated professionals who know their job is to be as flexible and creative as our students need us to be,” Gonzales said. She added the fall’s success is dependent on strong partnerships between district leadership and parents.

During an Aug. 3 RRISD special education town hall, Gonzales said the district would begin readministering special education evaluations in August, following a temporary suspension of the services in the spring.

“We definitely can’t risk under-identifying, which would mean a student wouldn’t get the specially-designed instruction that she or he needs,” Gonzales said.

However, several parents expressed concern about the lack of evaluations offered during the five-month timespan. Heidi Goldman, a parent organizer of the Round Rock Dyslexia Group, said her primary frustration has been the discontinued evaluations.

“Many of us are in disagreement with the services offered by RRISD for dyslexic students and are in our own battles with school staff to get appropriate services or identification as special education for our children,” Goldman said.

To ease the transition, RRISD is allowing students enrolled in SPED to return to campus Sept. 10, ahead of all others.

Paula Rojas’s third grade son has been diagnosed with dyslexia and high-functioning autism, and receives special education services for speech and articulation. Rojas said her son cannot read or write and struggled with in-person learning due to being pulled out of classes and the sense of shame associated with it.

She originally looked forward to virtual learning and the added privacy for her son’s service accommodations.

“I was excited to get him away from that because I've watched him grow and blossom away from the stress that he had and the shame of it,” she said.

However, she noted he struggled under the virtual format, due to speech delays and lack of familiarity with the online education system.

When in-person learning resumes, Rojas said she is unsure which option she will choose for her son and is concerned if virtual learning will better meet her son’s needs.

“How can I make a decision when you can't tell me what going forward will look like?” she said.
Round Rock Round Rock ISD RRISD RRISD Special Education Special Education Chrissy Weber Marie Gonzales Paula Rojas Heidi Goldman RRISD news Coronavirus (COVID-19)
SHARE THIS STORY