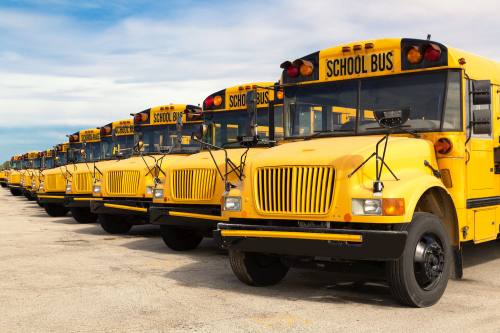 Students busing to Pflugerville ISD schools are doing so on district-owned and -operated buses for the first time this school year.

The 2019-20 school year marks the launch of the PfISD Transportation Department and its fleet of 159 school buses. Previously, the school district contracted busing and transportation services from Durham School Services, a vehicle charter company that works with school districts in 31 states, according to its website.

PfISD officials said the transition will help the district retain quality control and save funds in the long term.

“One of the things we wanted to do as a district was really get a better control of this specific area,” PfISD Chief Operating Officer Ed Ramos said.

In November, the school district proposed a $322 million bond package for voter approval, which passed with 66% of the vote. The bond package included a $14.8 million provision for purchasing a fleet of buses equipped with air conditioning, heating and seat belts.

PfISD expects the transportation department, which will be led by recently hired Executive Director Michael Brassfield, to save money in the long run. Ramos said the district budgeted $8.9 million in the 2018-19 school year to pay for transportation costs, with much of that going to Durham.

While the budget has not yet been finalized, Ramos said the district expects the transportation department to cost $9.7 million. The amount is larger than the year prior, but it includes startup costs, such as recruiting, training and administration. In the coming years, PfISD expects that amount to come down.

“This will probably be the year we have the highest cost on the transportation department,” Ramos said.

Ramos expects each new bus to last the district 12-15 years, but the district estimates it will add somewhere between 10-20 buses in “the first few years” to accommodate accelerated student growth, Ramos said.

To operate its buses, the school district had to recruit a new team of bus drivers ahead of the 2019-20 school year. Drivers make $20.09 per hour out of the gate, a rate Ramos said puts PfISD ahead of other districts, making it easier to recruit. Previously, Ramos said the district had difficulties recruiting enough bus drivers to meet demand.

“We were consistently delivering our students to school and home late, and to us that was unacceptable,” Ramos said. “We knew we needed to come out with competitive wages. … We believe we are the highest-paying in Central Texas.”