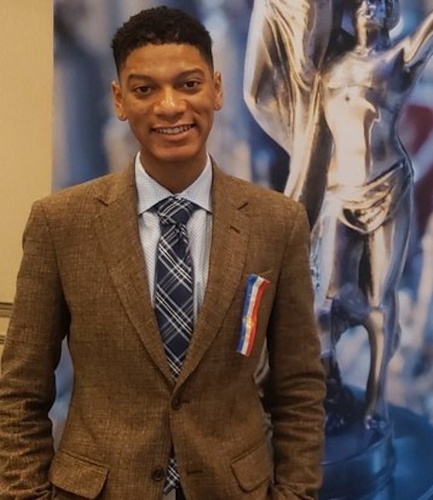 A 2019 Pflugerville ISD graduate has made history as the first African American participant to win the National Speech & Debate Association National Tournament.

Rene Otero, a recent graduate of Hendrickson High School in Pflugerville, became the first PfISD student to win a national title, according to a PfISD news release. This year's national competition, held in Dallas on June 21, saw Otero finishing first out of 242 students in the international extemporaneous speaking category, per the release.

As part of the international extemporaneous speaking category, Otero had 30 minutes to prepare a 6-7 minute speech on the topic at hand. During the NSDA Nationals final round, Otero prepared a speech in response to the question, “Should political leaders focus first on political empowerment or economic equality?”

HHS Speech and Debate Director Kirsten Nash said Otero's passion and drive inspires others to want to see him succeed.

“Obviously, he’s really intelligent and he works extremely hard, but Rene makes you want to listen to him," Nash said in the release.

This wasn't Otero's first appearance at the national competition. He finished 14th at nationals as a sophomore at HHS before ranking in eighth place last year, per the release. Following his national win, he will attend The University of Texas at Austin this fall, where he will compete as part of the university's speech and debate team.

For Otero, he said he hopes his win can inspire other students to see themselves and their identities reflected on a national stage and to have the courage to pursue their goals.

“If you see someone like you, then you feel like it is possible," Otero said in the news release. "I never felt limited by my identity when I was on the team at HHS, and now other kids can see this achievement and know that if they don’t limit themselves, then great success can happen.”