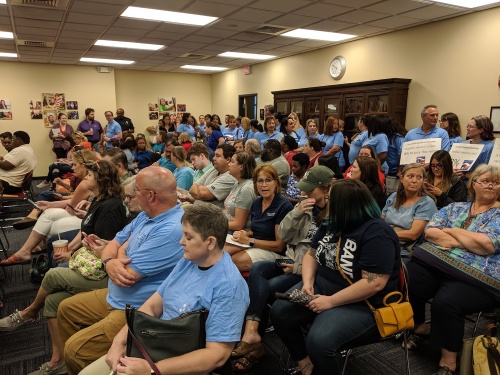 Members of the Pflugerville Educators Association pack the district's board room June 25 to advocate for higher compensation increases.

Pflugerville ISD staff, faculty and members of the local teacher’s union packed the district's board room and spilled into the hallway of the administration building ahead of a June 25 trustees vote on pay increases for the upcoming school year. Several held signs advocating for an 8% raise, others asked for raises comparable to their peers at Round Rock ISD, Austin ISD and Leander ISD.

In the end, trustees approved a minimum 6.7% pay increase for teachers, librarians, nurses, counselors and licensed professionals. That represents one of the larger pay increase scales across the region, according to the district.

In spite of the recommendation, PfISD Chief Operating Officer Ed Ramos warned the board that the school district could face a windfall of $5.9 million in funding if the state decided to rescind the district’s status as a “Fast Growth District”. If that happens—which the district would know by December—the school will be facing a $3 million budget deficit after the approved staff raises.

Ramos and Superintendent Doug Killian both told they board felt “comfortable” recommending the new pay rates, however.

“If we drop off the fast growth list it will hurt, and it will hurt bad,” Killian said June 25. “While I agree we could be really fiscally conservative, we can trust that ... that we would get [the budget] balanced at the end of the year.”

After the trustee vote, faculty—comprised of teachers, librarians, nurses, counselors and licensed professionals—is set to see a significant pay raise. Inexperienced faculty, or those with 5 years of experience or less, will receive a 6.7% increase in overall compensation. The pay raise jumps to 7% for faculty with 6 or more years of experience.

Support staff and other district employees—including school bus drivers, janitorial staff, administrative staff and more—will see at least a 4% pay increase after the vote tonight. Salary staff will see that 4% raise, while hourly workers will see a 5% raise.

Initially, PfISD administration recommended a 4% raise across the board for support staff, but Killian urged the hourly worker rate was bumped. Ramos told the board that 1% increase for hourly staff will add approximately $360,000 to the overall compensation budget.

Overall, the staff increases will cost the district more than $10 million in the upcoming school year.

The pay increases come in the wake of House Bill 3, a state education funding bill that was signed into law on June 11. Through that bill, PfISD was awarded up to $12.03 million from the state for the 2019-20 school year.

“A requirement is [school districts] are to use 30% of new funding for compensation increases. … If we follow the letter of the law for our teachers, that would mean a 1.8% raise, and that is not going to happen at PfiSD,” Ramos said.

A large portion of those new funds—$5.9 million—is contingent upon the district maintaining its Fast Growth designation from the Texas Education Agency. School districts are designated as Fast Growth districts by the state after they experience student population growth over the last five years of at least 10% or a net increase of 3,500 or more students, according to the advocacy group Fast Growth School Coalition.

PfISD experienced a 3.3% growth in its student population from 2017-19, per TEA figures.