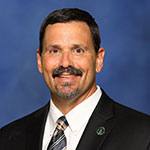 Through Cervi's role in RRISD, he oversaw a staff of more than 1,100 in the district's support services departments. These departments helped coordinate the growth of facilities in a district with more than 48,000 students.

Cervi oversaw the work done with funds from voter-approved 2014 bond money. He presented the most recent project updates at the Dec. 8 RRISD board meeting, when trustees began discussions on whether to call a future bond for a potential 2018 election.

Trustees agreed to discuss the matter further at tonight's board meeting.