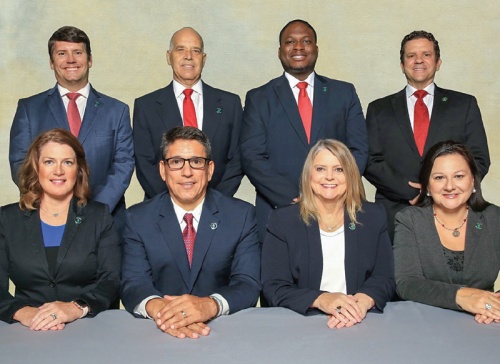 Stuart Selvaggi (far right, top row) was appointed as Place 6 trustee and resigned within 15 days. He was sworn in the same night he was selected for the position.

Most job interviews don't entail potential colleagues questioning applicants in front of a public audience with a live stream broadcasting the interview online.

That was, however, what four trustee candidates experienced Thursday before the Round Rock ISD board of trustees as part of an appointment process for the board's vacant Place 6 position.

The four candidates are Kristine Parker, John Grey, Jen Henderson and Steve Math. After interviews Thursday, the candidates were told a final decision from the board could come within one week.

Board President Diane Cox said trustees decided to hold off on naming a final candidate Thursday because not all trustees were present for the interviews or an ensuing debate in closed session.

Trustee Edward Hanna was away on a business trip, and Trustee Suzi David arrived following the interview portion of the evening because of a delayed flight, according to Cox.

Superintendent Steve Flores was also absent from Thursday's proceedings because of an event at the Holdsworth Center, an educational leadership center RRISD started working with this year.

Cox said the delay would allow the public to contact trustees with their own feedback on each candidate's performance. Trustees' email addresses for public feedback can be found here.

She said the board should name a final candidate at its next regularly called meeting, scheduled for Thursday, Nov. 16, and be ready to swear in that candidate the same night.

During the interview period of the evening, trustees asked candidates the same nine questions, focusing on technical knowledge, personal experience within RRISD, feedback for the district's previous actions and personal traits.

Following a closed session, trustees then followed up with each candidate with one more question asking for an experience when candidates built consensus within RRISD.

The four candidates come from different backgrounds and have various levels of involvement within the community.

Parker was the first candidate to answer trustee questions. She previously worked as the deputy district director for U.S. Rep. Michael McCaul and works today in government relations for Texas Star Alliance and Association of Rural Communities in Texas. She said she would draw on her experience working with constituents in McCaul's office when being accountable to RRISD community members.

Parker said her strength on the board would involve her decision-making process, including sitting back, listening, researching issues and then assessing situations. When asked what RRISD could have improved upon in the last five years, Parker said recent changes to middle school attendance boundaries could have been communicated more effectively to parents and stakeholders.

Parker, like Henderson and Math, was uncertain about the difference between the district's maintenance and operations tax rate and the interest and sinking rate.

"Although I may not know the tiny, minute details of the workings of the board thus far, I am definitely willing to dig in, learn, research and make decisions that would only be best in promoting education in the district," Parker said in a closing statement during her interview.

The next candidate interviewed, John Grey, was part of the original group of seven candidates to interview for the vacancy left by Paul Tisch in May. Grey previously worked for the law firm Walsh, Anderson, Brown, Schulze & Aldridge, P.C., as counsel to school districts. He now is employed by the Texas State Teachers Association as a government relations specialist.

Grey exhibited his understanding of the public education system in his answers, detailing experience working with previous boards on bonds and budgets. He was the only candidate who could specifically answer the question related to the district's two tax rates. Grey also zeroed in on the district's recent efforts to update its strategic plan as a positive change in RRISD.

"[Strategic plan forums] are the types of things that should continue," he said. "If you want to be honest about it, we're going to need a bond in the near future — we have to go out and get consensus among the community for stakeholders, et cetera. If they have input, then they feel like they have skin in the game."

Henderson was the third candidate to be interviewed. She is employed by Hagood Engineering Associates Inc., as a civil engineering project manager. She also serves on Round Rock's Planning and Zoning Commission.

Henderson said she would bring strong communication skills to the board, having coached baseball teams for the past five years, and therefore having experience talking with parents and using a variety of communication styles.

When asked how RRISD should address its achievement gap, Henderson said she believed some parents might be unaware of which academic tracks their kids should be placed into, such as whether it be in a gifted program or a sports program.

She also said the district could have communicated more effectively about the failed 2017 bond election.

"It was a good idea, but the work behind it wasn't communicated well," she said.

At the conclusion of her interview, Henderson brought up recent construction delays at McNeil High School. She said she would like to investigate that issue further to find out what caused the delays.

The final candidate, Math, is an actuary at Texas Mutual Insurance Company and said he has been in the Round Rock ISD area for the past eight years. He has degrees from Brooklyn Tech and Massachusetts Institute of Technology.

Math said his strength lies in the listening skills he would bring to the board.

"I really enjoy interacting with people and hearing different perspectives," Math said. "I have watched all of you for many, many hours and feel like I know all of you. Yes, there will be disagreements, but I feel like we are all working with the same vision and set of values."

Math said he lives in RRISD's Westwood High School attendance area, and would like to see some geographic diversity represented on the board. He said diverse perspective could have played an important role in the discussion about class rank that sparked debate in the past month from parents of students enrolled at Westwood High School.

Watch the full interviews of the four candidates here.

Once sworn in, the new Place 6 trustee will serve a term that will end in November 2018.

All candidates interviewed Thursday submitted an updated application and underwent a background check, according to Cox.