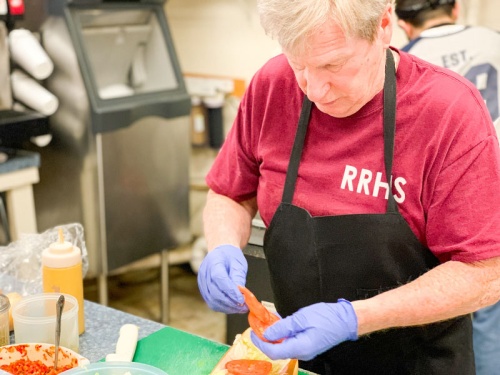 Nearly every customer who walks through the door of Hoody’s Sub Shop is greeted like an old friend by the restaurant’s owner, Richard “Hoody” Hood.

“I have people come in here that I have served subs to for years,” Hood said, pointing to a mother and daughter placing an order at the register who had both worked at the restaurant in the past. “If people keep coming back, you know it’s good.”

The restaurant has become a fixture of Round Rock since it opened nearly 30 years ago in April 1989. Hood, a Delaware native, opened the restaurant after operating a sub shop in Austin called Delaware Subs with a partner in the 1980s.

“Our subs and cheesesteaks are authentic East Coast—Delaware and Philadelphia—subs,” Hood said. “But ours stand out because we use the best of everything and try to keep the prices at a good price for everybody.”

Hood said he uses all New York-based Boar’s Head-brand meats as well as peppers, meatballs and sausage from the East Coast and cheesesteak meat from Philadelphia. The bread, however, is local.

One of the most popular subs is the Philly cheesesteak, which is served hot with grilled ribeye meat, mushrooms, cheese, onions and peppers.

Another customer favorite is the meatball sub, which includes meatballs, provolone cheese, onions and peppers.

Hood said one of the restaurant’s biggest assets is his staff, some of whom have worked at Hoody’s for more than a decade.

“I have a good group of people, and they’re the ones who always bring people back,” Hood said.

The walls of Hoody’s Sub Shop are covered in photos of regulars as well as local youth sports teams. Hood can point to photos and talk about the people pictured, along with their sandwiches of choice.

As for the future, Hood said the restaurant is not going anywhere anytime soon.

“I just love coming up here, I love the customers,” Hood said. “It’s like having another family up here, it really is.”