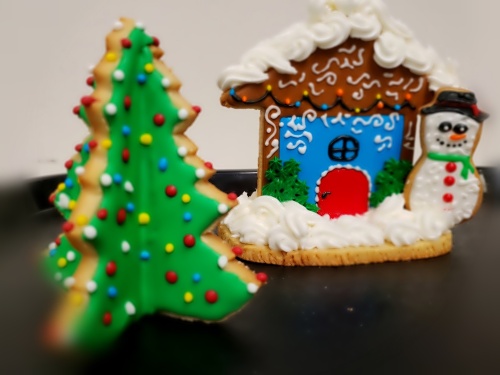 Juan Leon of Cafe 1 by Chef Juan in Pflugerville will appear on Food Network's "Christmas Cookie Challenge" on Nov. 19 at 9 p.m.

Juan will appear on the fifth episode of the show's second season, which is hosted by Eddie Jackson. The episode, titled "Some Assembly Required," will feature five chefs competing in two challenges for judges Ree Drummond, Dan Langan and Aarti Sequeira. Each episode of the show features a new set of contestants competing in different challenges with the winner taking home a $10,000 grand prize.

Juan said he received an unexpected call from a Food Network producer over the summer asking if he would be interested in participating in the competition.

"We thought it was a joke," Leon's wife, Annie, said. But after receiving further details and researching the production company, Annie and Juan learned it was the real deal.

"Of course we were so excited we didn't bother to ask, 'How did you find us in Pflugerville?'" Annie said. "Because they chose him, it's an honor."

Juan went to California to film the episode during the last week of June and said he had no idea what to expect.

"The kitchen was huge," Juan said. "It wasn't until we started filming that I noticed why the space was so big. ... It was because they had like five cameras on each person. It went from big to small."

After speaking with some of the other contestants Juan said he learned that he was the only one who had not appeared on TV or applied for the competition.

"One contestant said it took her five years to get picked," Juan said. "I guess I was one of the lucky guys."

"We think he was nominated by someone," Annie added. "To this day we still don't know."