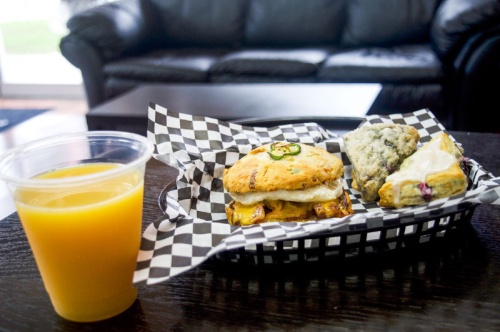 Baked u2018n Sconed offers scones in addition to other pastries.

Tiffany Anders, founder and proprietor of Hutto’s Baked ‘n Sconed, has fashioned herself a specific title for her position. Anders considers herself, first and foremost, an “Executive Scone-ologist.”

After customers of a previous restaurant kept returning to specifically buy her scones, Anders went into business with her family and opened Baked ‘n Sconed in November 2013. The native Texan has been serving uniquely flavored scones on a daily basis ever since.

When Baked ‘n Sconed opened its doors the cafe served only a handful of lunch options, according to manager Lacey Griffith. In that time Anders has considerably expanded the menu to include everything ranging from savory breakfast sandwiches to salads and paninis.

“I really love our chocolate chip cookies,” Griffith said. “[Anders’] are so, so good—like, ‘Think about them the first thing when you wake up in the morning,’ good.”

In October, the cafe will begin selling its pumpkin scone to celebrate the fall season and Anders said customers can expect chocolate peppermint scones during Christmastime.

Between the scones that are served at Baked ‘n Sconed and those she delivers to local businesses, Anders said she makes 45 dozen daily batches in the morning. The habitual baker wakes up and starts working at 4 a.m. to meet the daily demand.

Griffith states that Anders’ scones eschew the traditional expectation of scone as a dry, bricklike pastry.

“I like to describe it as a biscuit and cake. If you mix those two things ... you get that softness and sweetness,” Griffith said.