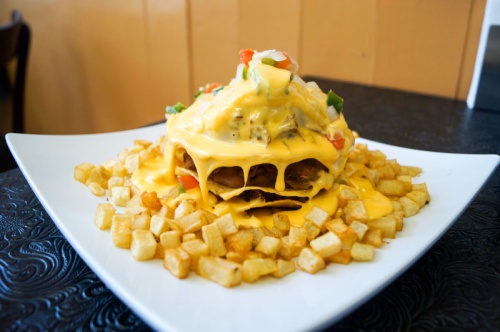 Since opening Taco House in downtown Pflugerville nearly two years ago, Blanca Medrano said every day has been different, but some things have remained the same.

“You see some people that come in every day. We know all of their names and orders,” Medrano said.

Medrano opened the restaurant in November 2016 after noticing the storefront was available while dropping her grandson off at day care nearby.

Medrano operates the restaurant with her two daughters—Bianca and Jaime—and three other employees. They welcome first responders and said they make sure their orders come out as soon as possible so they can eat before being called to an emergency.

The Taco House menu is made up of a variety of dishes, including breakfast and lunch tacos, migas and quesadillas. Customers can even choose items—such as omelets—that are not on the menu, Medrano said.

“If we have everything here, we will make it,” Medrano said.

One of Taco House’s most popular items is the Torre de Carnitas, a “tower” made of pork carnitas with eggs, beans and pico de gallo layered between crisp corn tortillas and topped with queso and avocado.

Taco House also offers a taco bowl option for its Pfunky Tacos. The bowls include all of the taco ingredients served on a bowl of mixed greens and tomatoes instead of a tortilla.

Whatever one orders, Medrano said she hopes the restaurant offers a place to relax and enjoy a good meal.

“People here, they are really nice,” Medrano said. “It makes us feel good because they come and sit and stay
for a while.”