Round Rock restaurant serving Peruvian dishes with a healthy twist 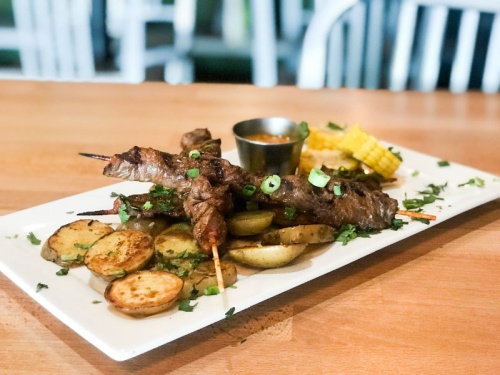 After almost 25 years of working in restaurants, Christian Mariategui decided to open his own restaurant in Round Rock in October 2016. At Quinoa Grill, Mariategui serves dishes inspired by his home country of Peru.

“I was sure that the people who live around here would appreciate having something different,” Mariategui said.

Mariategui said he attended culinary school in Peru and then cooked in a variety of hotels. He went on to travel to several countries and learned to cook an assortment of dishes, but he always had Peruvian cuisine on his mind.

Mariategui said he made quinoa the namesake and a staple ingredient of the restaurant because the grain originated in the Peruvian Andes between Peru and Bolivia. The area is the only natural source of quinoa, Mariategui said, although it is now grown in other places.

One of the vegetarian items on Mariategui’s menu—the quinoa burger—is made from his mother’s recipe and uses quinoa in place of a hamburger patty.

The southeast Round Rock restaurant serves not only Peruvian dishes, but recipes inspired by South American cuisine as well. One such dish—tequenos—is popular in Venezuela, but is made with an original twist in the Quinoa Grill kitchen. The appetizer features queso fresco and oregano inside of a fried wonton and is served with a side of avocado ranch.

“We don’t prepare anything in advance, so when you order something, we make it just for you. We don’t buy anything frozen because nobody makes what we are making,” Mariategui said. “It’s something new that we are bringing to the game.”

Mariategui said the menu and atmosphere at Quinoa Grill offers locals a dining experience that is unique to the area.

“We want everybody to come and have a good time around the table, because that’s what we do in Peru,” Mariategui said. “That’s really important.”