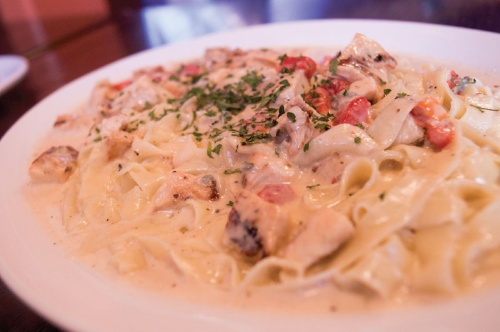 Fettucinni Palermo is topped with a cream-based Gorgonzola cheese sauce, roasted red peppers and chicken that has been marinated and grilled.

One quick glance into Antonio Giner’s kitchen at Palermo Pasta House reveals a curious absence of one commonly found kitchen appliance: a freezer.

That is partially due to a lack of space in the kitchen—Giner’s chefs operate in an intimate cooking space—but Palermo’s philosophy does not necessitate a freezer: The restaurant does not buy anything frozen.

“We do ‘slow’ cooking. Everything is done in-house. When we run out of something we’ll make it the next day,” said Giner, owner and head chef of Palermo.

Located on Main Street in downtown Round Rock, Palermo focuses on the cuisine of Giner’s childhood: fresh pasta, signature sauces and Argentine-Italian gastronomy. Giner opened his restaurant in May 2015.

Giner split time growing up between Southern California and Buenos Aires, Argentina. In 2012, Giner took a sabbatical and trained for a year at Mausi Sebess Escuela de Cocina, a culinary institute in the Argentine capital.

“[Argentine] neighborhoods have fresh pasta stores, but we don’t have anything like that here,” Giner said of Round Rock.

The chefs at Giner’s restaurant handcraft their pasta several times a week in one of two styles: semolina pasta, made from coarse Italian flour, or egg pasta, which are silky and flat noodles.

Palermo expanded its menu in November to include three more pastas—bucatini, rigatoni and fusilli. The restaurant already serves cannelloni, spaghetti, ravioli, lasagna, fettuccine and tagliatelle—all made by hand.

Every one of the restaurant’s sauces is created in-house as well and features fresh ingredients. Giner makes all of his tomato-based sauces from California tomatoes that his staff crushes by hand before cooking down with fresh herbs and vegetables.

The restaurant has more than 20 sauces total, including sugo, a sauce made from the braising juices of veal short ribs. None of the sauces are made using processed ingredients, such as tomato paste.

“What I’m trying to do with the [new] menu is let people explore the different sauces—and not necessarily with a pasta they recognize,” Giner said.