Hutto City Council will vote on a resolution related to a proposed apartment complex at its Feb. 20 meeting. (Kelsey Thompson/Community Impact Newspaper)

Carver Ridge Apartments LP proposed the apartments to the city. The developers plan to submit an application to Texas' Department of Housing and Community Affairs for consideration of the 2020 Competitive 9% Housing Tax Credits, per city documents. The low-income housing tax credit—or LIHTC—program is aimed at encouraging developers to create or rehabilitate affordable housing, according to city documents, and is awarded through an application process.

The LIHTC program subsidizes either 30% or 70% of unit costs in a project. The 30% subsidy applies to noncompetitive projects with a 4% tax credit and helps to cover rehabilitation efforts. The 70% subsidy is used on competitive projects with a 9% tax credit that constructs new developments without additional federal subsidies, according to the TSAHC.

As applications are being compiled for submission and future consideration, resolutions of support provided by governments to developers are often requested to help strengthen the application, per city documents. If Hutto's resolution of support is approved by council and the development receives the 2020 Competitive 9% Housing Tax Credits, the city will also provide reduced permitting fees to Carver Ridge Apartments LP in the amount of $250, the documents state.
RELATED STORIES

A draft version of the site concept layout plan included in city documents lists a clubhouse structure along with six buildings comprising apartment units on the 7-acre tract of land. A public hearing was held on the tract of land in 2016, when it was rezoned from B-2, general commercial, to an MF, or multifamily zoning district.
Hutto Hutto City Council Hutto developments Hutto apartments Low-income housing Hutto news
SHARE THIS STORY

The Flats Round Rock and The Rock Sports Bar were among more than 80 recipients of the Round Rock Cares fund. 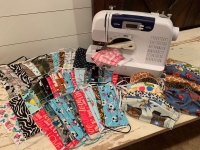 Hand-sewn masks can be used to preserve the life of a health care worker's medical-grade mask or can be distributed to patients to prevent the spread of germs.

Where to go for coronavirus testing resources in Hutto

Baylor Scott & White Health is offering in-person testing for the coronavirus at its clinics on a case-by-case basis, according to BSW Health representatives.

The shop, which sells Thai rolled ice cream, frozen yogurt and specialty drinks, has not announced a reopening date.

PizzaRev closes permanently in Round Rock

The create-your-own pizza chain restaurant allowed guests to customize personal pizzas with a variety of toppings.

The temporary closure is set to run from April 6-May 1.