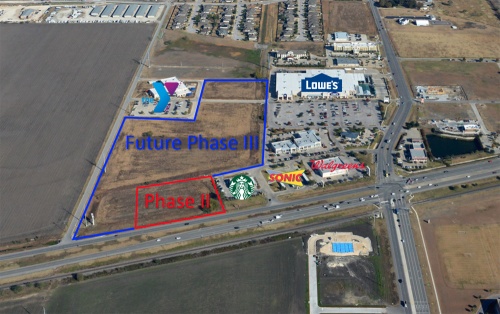 Several new tenants have been announced for Townwest Commons, a mixed-use development located at Hwy. 79 and Ed Schmidt Boulevard in Hutto, according to a Sept. 3 news release.

Houston-based NewQuest Properties has broken ground on Phase 2 of the project, featuring two new buildings with a total of 15,560 square feet.

Castle Dental, Go Wireless and Sport Clips comprise the retail space currently pre-leased, per the release. As it stands, one vacant lease remains in the building.

"Hutto is one of the last places to get a house for under $300,000 in Austin," said Meredith McLeod-Cobb, an associate and development partner of NewQuest, in the release. "We are seeing a lot of interest in phase II from the medical community, as well as NewQuest developing a professional office building to accommodate the unmet demand in the Hutto market."

Lowe's Home Improvement is the anchor business in Townwest Commons. Approximately half the land has already been developed, according to the release. The buildings included in Phase 2 will be complete in early 2020, per the release.