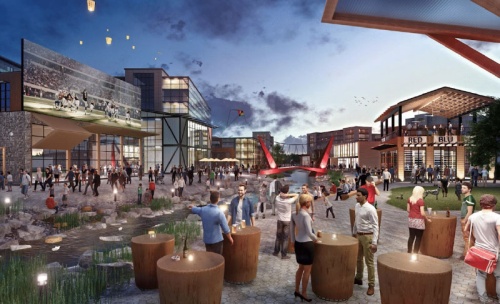 A rendering of a mixed-use development used in the mayoru2019s State of the City address.

It was site unseen for a New York-based developer when plans for a new Pflugerville mixed-use development got off the ground four years ago.

“Some things just feel right and you go with it,” Negba Group co-founder Tomas Sheleg said in a meeting with Community Impact Newspaper on May 1.  “We didn’t see the site in person. We just felt like it was the right thing to do.”

Sheleg has seen the site plenty now, as his company did due diligence, met with officials, purchased the property and submitted a master plan for the project to the city of Pflugerville.

The project will be vetted by various city departments before votes on zoning, approval of the development and any incentives take place.

The project, which will not be named Northpointe as has been reported, will take on an identity and new name as the process moves forward, Sheleg said.

The development would be the first in Texas for the Negba Group and if approved will take six to eight years to complete with different phases. Residential, retail, dining and entertainment will be part of the project, with a centerpiece pedestrian bridge connecting the properties.

“The bridge would unite the community,” Sheleg said, describing it as an open air, illuminated structure that would be the background for Instagram photos and a gateway to the city for drivers on SH 130.

Pflugerville Mayor Victor Gonzales said the development could be a “Domain or Triangle” for the city. Gonzales mentioned the project during his State of the City address April 2.

“[This development] will be a large footprint but not as large as Stone Hill [Town Center],” Gonzales said, referring to the 196-acre development across FM 685 from Typhoon Texas. “With the Pecan District on the west side of Pflugerville and this development along [SH] 130, these [properties] will have a positive domino effect on the growth of our city over the next 25-30 years.”

Sheleg said his team’s goal for the development includes being relevant in the future, as The Domain has, but that may be where the similarities end.

“We don’t know what we don’t know, but the truth is this makes all the sense in the world,” Sheleg said. “We did look at other projects here, and we have learned from them. We would be stupid to say ‘somebody did something, it was successful, let’s ignore it.’ We want to be relevant and flexible now and in the future.”

The architecture of the buildings throughout the development will take on a European touch when it comes to the sense of scale.

“The height of the buildings, width of roads [and] an area where no cars are allowed in the middle of the project will make the space unique,” Sheleg said. “It won’t be a grid. It will be influenced by Austin and Texas. Simplicity is the essence of sophistication, and we have an open mind going into the project.”

Sheleg said Pflugerville officials, the Pflugerville Community Development Corp. and input from residents have been crucial in “setting the tone” for the type of development the city would like. Sheleg’s company will have offices in Pflugerville soon.

“We love it here,” Sheleg said. “We spend a lot of time here. We like the economics here, the open-minded city, the growth, and we see the potential. It’s just hip. We want to be the heart of Pflugerville.”