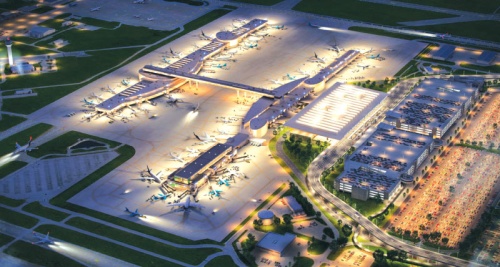 Though Austin has grown to be the nationu2019s 11th-largest city, Austin-Bergstrom International Airport ranked 34th in departures among U.S. airports in 2017. That could be changing. ABIAu2019s 2040 Master Plan includes plans to expand to add 32 gates over the next two decades. Those gates, in addition to the nine new gates set to open this spring, will help bring in a projected 31 million annual passengers.

Responding to tremendous population growth across its 21-county service region, a blossoming tourism industry and increasing demand, Austin’s largest airport and one of its surrounding reliever airports are investing heavily in expansion plans.

On the heels of a $350 million, nine-gate expansion set to open this spring, Austin-Bergstrom International Airport has plans to add an additional 32 gates—an evolution that would put the airport on par with Texas’ largest international airports.

“We can be as big as DFW,” said Lyn Estabrook, Planning and Development manager for ABIA, referring to the airport’s ability to handle travelers.

Out at Austin Executive Airport, a privately owned reliever airport nestled in Pflugerville’s extraterritorial jurisdiction, officials have built multiple hangars and an air traffic-control tower in the past 12 months. Those improvements came in response to and in anticipation of continually increasing demand, according to Jodie Kaluza, airport manager for Austin Executive Airport.

“We’ve seen, since opening [in 2011] to today, about a 40 percent increase in business across the board,” Kaluza said.

By 2030 officials at ABIA plan to grow the airport by 20 gates, and that is excluding the ongoing nine-gate development scheduled to open this spring. Those additional 20 gates would be constructed as a separate terminal to run parallel to the existing Barbara Jordan Terminal at ABIA.

ABIA added direct flights to Europe via British Airways, Norwegian Air Shuttle and Lufthansa in the past year alone, per Estabrook. ABIA now offers more than 80 total  direct flights. The planned gate expansions will soon allow ABIA to process multiple Airbus A380s, the largest commercial airplanes in the industry, on its runways for the first time ever.

But before ABIA fully expands its gates, Estabrook says the airport needs to build up its supporting infrastructure, including the airport’s departure drop-off and terminal service areas.

“Check in functions will be removed from the Barbara Jordan Terminal,” Jim Smith, ABIA executive director, told council on Oct. 30.

Construction crews are currently working on a 6,000-space parking garage, which Smith expects to open at ABIA around January. In all, the airport plans to add 11,000 new parking spaces by 2029.

“You can always build more gates, but if you can’t get people to the gates they’re useless,” Estabrook said.

To help the capital area’s growing population get to and from ABIA, the Texas Department of Transportation has more than $4.89 billion outlined in funds to expand and maintain roads surrounding the airport, per numbers from the agency’s online project tracker.

ABIA additionally has a relocation of SH 71 listed on its 2040 Master Plan, though no such plans for a relocation are in TxDOT’s project tracker. Derick Hackett, a public information specialist for ABIA, said the airport expects traffic to heavily congest SH 71 by 2040, and officials are looking to get out ahead of the issue.

“That’s something we’re noting and making everyone aware, looking into how SH 71 is going to be able to handle that many passengers,” Hackett said.

Between the 20-gate expansion, the terminal processing center expansion, drop-off and pickup area improvements, and construction of a larger central baggage system, ABIA officials estimate the first phase of its expansion plan to carry a price tag of $4.3 billion.

“We obviously do not have the capacity to fund $3 billion worth of projects today,” Smith said.

Hackett said the airport is “looking at all options” on how to pay for the expansion plans. The airport has several funding tools at its disposal to help with expansion efforts, according to Hackett, including private capital, state and federal grant funds, public and private partnerships, and revenue bond sales, which are not backed by taxpayer funds.

Austin Executive Airport is one of the area’s reliever airports and provides services to private jets, charter jets and small-cargo transportation.

“We see a lot of the business travelers,” Kaluza said, adding the airport typically handles between 50 to 80 flights every day.

The 585-acre airport additionally houses services for St. David’s LifeSave fixed-wing medical transportation, and according to Kaluza, the Austin Police Department will soon base its entire air fleet out of one of Austin Executive Airport’s hangars.

In the past 18 months Austin Executive Airport has built two community hangars and added its own air traffic-control tower, a move that allows a more broad range of aircraft to fly into the airport.

The two most recent hangar additions feature 20-foot-high doors allowing larger aircraft, such as Gulfstreams, to be housed at the airport.

Currently, Austin Executive Airport officially houses 129 aircraft in its hangars, and Kaluza is recruiting more every year. The airport is looking to secure company fleets sometime in 2019, deals that would demand even more hangars to be built on-site.

TxDOT in October released its “Economic Impact of Aviation” study, a review of how Texas’ airports affect local economies.

According to the report ABIA in 2017 generated a total economic output of $7.61 billion, a figure totaling on-airport businesses, capital improvement projects, off-airport visitor spending and secondary impacts attributed to a multiplier effect, where the injection of new money leads to more spending. In comparison, ABIA generated $2.41 billion of economic output just ten years ago, according to Smith.

The study also found that ABIA accounted for the employment of 74,148 people with a total annual payroll of $2.51 billion.

However, Greg Miller, director of Planning and Programming of Aviation and Air for TxDOT, said the most tremendous growth in Texas occurred with small airports, ranging from agricultural airports to operations like Austin Executive Airport.

“It is basically the same amount of airports; it is just more activity at the airports,” Miller said.

“We are an access point. We are easier to get in and out of than [ABIA] if you have access to your own private aircraft,” Kaluza said.

Ultimately airport expansion in the area boils down to meeting the region’s demand. As ABIA’s 21-county service area continues to explode in population, the area’s airports have to respond.

Austin is the nation’s 11th-most populous city, according to U.S. Census Bureau figures, though Federal Aviation Administration figures show ABIA ranked 34th in the nation in 2017 in total enplanements, or boardings.

According to those same FAA figures, ABIA is the fourth-fastest growing medium-hub airport in the nation in terms of total boardings. In 2017, ABIA experienced an 11.77 percent year-over-year growth in boardings from 2016, up to 6.81 million enplanements.

The FAA only counts departures in its enplanement figures, effectively counting just half of ABIA’s total annual passengers, per Estabrook.

Estabrook stated ABIA is experiencing a 15.5 percent growth in passengers this year through August, meaning the airport could see close to 8 million total enplanements by the end of the year.

Both Estabrook and Kaluza said their respective airports are taking measured, cautious approaches to expansion—and the airports have a lot of room to grow.

ABIA has 42 acres to build out its gate expansions, and Estabrook said the airport’s “ultimate plan” for full buildout is to accommodate approximately 72 million annual passengers. Per Estabrook, that is similar to Denver International Airport’s traffic, which the FAA pegs as the fifth-busiest airport in the United States.

“The campus itself can handle anywhere from 60 [million] to 70 million [annual passengers] if we ever have that need,” Estabrook said.