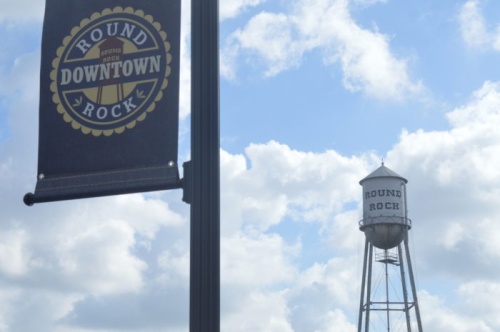 The Round Rock Transportation and Economic Development Corporation approved the purchase of four pieces of property surrounding the iconic downtown water tower Thursday evening and continued discussions with a developer for a mixed-use development on the property.

The TEDC board unanimously voted to approve a memorandum of understanding with developer Pearlstone Holdings as well as the purchase of four properties for what is known as the Water Tower Project. An MOU is a non-binding document that acknowledges an agreement before legal action is in place.

"[An MOU] is a way to put down in writing what the two parties understand with respect to their discussions and negotiations," city attorney Steve Sheets said Thursday night, emphasizing that the document is subject to change.

Round Rock Mayor Craig Morgan said the action does not mean the project will move forward as proposed or at all, but instead reflected the city's effort to maintain control over the property.

"We have been approached by a developer that has an interest in owning all of these lots," Morgan said. "This is a very key piece of downtown Round Rock. ...We want to have some control over what goes there ultimately."

According to the MOU, the proposed project would include roughly 76,000 square feet of office space, approximately 9,600 square feet of retail space, a hotel with about 140 rooms and meeting facilities and 372 parking spaces. Morgan said that there is a limit of three stories for any building in that area.

The MOU states that for two years after the transaction, the developer would have the right to purchase the land from the city but any development plan for the area would require final approval from City Council.

The properties purchased by the TEDC include 102 and 106 N. Mays St. and 103 and 105 W. Liberty Ave. The city already owns the remaining property around the water tower.

"All that this is doing is giving us the assignment of the land to have control over what ultimately goes there," Morgan said. "There’s still a lot that has to be discussed."

Morgan said that by purchasing the land, the TEDC would retain control over the direction of any future development on the property.

"What is not happening tonight is any action on any type of specific project," board member Writ Baese said. "This is a once-in-a-lifetime opportunity ... for us to be in a situation where we can maintain the integrity of one of the most historic blocks in the city."