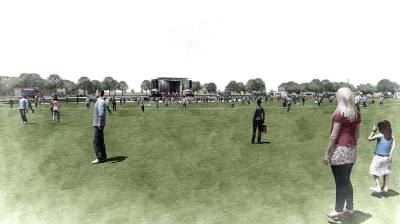 New development is underway on the southern end of Hutto city limits as developers and the city began moving dirt on two projects that are years in the making.

Hutto began primary construction in late April on the city’s latest quality-of-life project, an amphitheater located on undeveloped parkland on the shores of Brushy Creek.

Hutto Park at Brushy Creek, the temporary name of parkland the city acquired in January, is a 65-acre property located on the east side of CR 137, just south of Farley Middle School and Ray Elementary School. The property was bought after the city established a goal of purchasing 60 or more acres of community parkland in its 2015 Hutto Parks, Recreation, Open Space and Trails Master Plan.

Crews are now working on the park’s first attraction—a 4,000-seat amphitheater. At the end of its construction, the amphitheater will feature a shaded seating area for 1,000 attendees and will be able to accommodate thousands of additional people with an extended lawn area. The city of Hutto paid approximately $5 million between the costs of construction for the amphitheater and securing the park property.

That extended lawn will be put to use at this year’s KOKEFEST, the second annual country music festival organized by KOKE FM and hosted in Hutto. City officials expect the amphitheater construction to wrap up before this year’s festival, which will be held Aug. 10-11. According to city documents, event coordinators expect approximately 10,000 concertgoers the last night of the festival.

Hutto has since partnered with KOKE FM to have the radio station produce four to six events per year for seven years, beginning in 2019. According to Hutto Public Information Officer Eliska Padilla, the partnership will produce more than country music festivals.

“We’ve done a really good job in the past of having things like Sunset Block Party, but I see it being even larger than that. We might have bull riding or a car show,” Padilla said.

Just north of the parkland property off CR 137, developers are excavating land for the upcoming Brooklands neighborhood. Originally announced in October 2016, Hutto officials are hopeful that the first properties in the subdivision will become available by the end of the year.

The 161-acre subdivision is divided into seven sections and 885 lots. Brooklands will be connected to Hutto Park at Brushy Creek through access on the southern end of the subdivision.

According to U.S. Census Bureau data, the city of Hutto has an average household of 3.51 people, meaning if all 885 lots deliver housing units then Brooklands could potentially add more than 3,000 residents to Hutto.

The subdivision certainly means an expansion for CR 137, which is currently an undivided, two-lane rural roadway. Smith noted CR 137 is included in the upcoming Hutto Mobility Master Plan, which has not yet been submitted to City Council for adoption.

“I anticipate it will be at least a three-lane road, if not more,” Padilla said.
SHARE THIS STORY