Hutto prioritizes retail, industry as the city looks to pivot away from a “bedroom community” 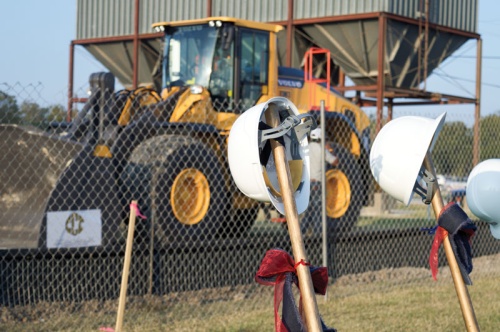 City of Hutto officials were joined by leaders from Hutto ISD and  the Hutto Chamber of Commerce at an event to celebrate the ground breaking of a light manufacturing facility built by California-based JRS Company Inc. on the eastern boundary of the city’s limits.

The facility, which broke ground Feb. 7, will be one of the first labors harvested from Hutto’s recent emphasis on diversifying its tax base with manufacturing plants—but it will not be a standalone success. In fact, all signs are pointing toward a second plant moving to Hutto from California in the near future.

In addition to the 70 full-time jobs JRS Co. said it will add on-site, 25 families will move from Covina, California, to Hutto with JRS Co. to continue their work with the sign frame and holder manufacturer. By the time the plant opens in September, those families will likely buy houses, shop at Hutto businesses and engage in the local community.

Those bolstered demographics, combined with the tax revenue to be generated by JRS Co.’s facility, stand to help drive the economic development that Hutto city officials have worked to generate over the past year.


A shift in development strategy

Hutto’s current city manager, Odis Jones, was brought in by City Council in November 2016 with the goal of being the figurehead for rapid development growth in the city.

“We needed to get a manager in here that ... had more broad experience at attracting businesses in the public-private partnership arena,” said Tom Hines, Hutto City Council member.

Before Jones was even brought on, council members had economic development pegged as a policy priority. At its 2016 annual retreat, Hutto City Council members determined the city had to build up different types of businesses in order to secure long-term stability.

“Everyone in the room was in agreement that we weren’t going to make it as a bedroom community for much longer,” Hines said. “We realized … 80 to 85 percent of the population would leave to go to work and shop on their way home. We needed retail to curb some of that bleeding.”

In the time since Jones was hired to run the city manager’s office in Hutto, several landmark developments have broken ground in the city’s limits.

Titan Development, a real estate development firm based out of Albuquerque, on Nov. 6 began construction of the first of several speculative buildings in Hutto’s upcoming Innovation Business Park. The development is expected to boast 800,000 square feet of speculative space by the end of its full build-out.

“That was important to us,” Jones said, referring to the development. “Hutto in the past was not able to compete because we didn’t have any speculative space.”

Just four days prior to the Titan Development ground breaking, the city began work at the Co-Op District, the mixed-use development that the city hopes is expected to massively diversify Hutto’s tax base.

By the end of its full build-out, the Co-Op District will feature a cinema, restaurants, office space, varied retail storefronts, multifamily residential complexes and entertainment venues. Developers are expected to invest $210 million in private capital into the project.

Most recently the city has initiated work on Burge Business Park, where JRS Co. will be located. The frame manufacturer is starting construction on its facility in March and hopes to have it completed just six months later. By the time its facility opens, it is likely that another company will have also made the move from the Golden State to Hutto.

JRS Co. looks to be the first of several California-based companies that Jones and his staff are prying away from the West Coast.

Though no deal has officially been signed yet, the Hutto Economic Development Corp. and City Council approved an incentives package to bring in another manufacturer from California. The yet-to-be-named company produces skateboard wheels in its facility. According to Jones, there is a third deal in the works to bring in yet another California company to Hutto.

“There’s a lot less cost to run a business here [in Hutto] than in California,” said Brad Jaques, CEO of JRS Co., at the company’s Feb. 7 ground breaking event.

Jaques and other officials involved with the recruitment of the manufacturer claim JRS Co. was enticed by the taxing environment, cost of living and the price of the property—three values that are all lower in Hutto than in California.

In 2016 the median home value in Covina, California—the former home of JRS Co.—was $415,300, according to data from the U.S. Census Bureau. Households in Covina this past year had a median of 5.3 rooms, and 66 percent of the dwellings were either one- or two-bedroom homes.

Compare that to homes in Hutto, where the median home value in 2016 was $153,000. For less than half the price of a typical Covina home, Hutto homes are larger—houses had a median 6.3 rooms, and more than 90 percent of homes had three bedrooms or more in 2016.

Jones and his staff are taking a targeted approach to recruit California companies to Hutto, focusing on businesses that fall within certain parameters defined by the city’s development team. According to Jones, his team is reaching out to California companies that employ 100-150 workers in facilities that are at least 4,000 square feet in space. Additionally, the company should be worth around $20 million.

As much as the past year has been one of expeditious development for Hutto, it has also been a year of monetary investment.

Since Jones’ arrival, the city has agreed to several multimillion-dollar contracts focused on improving infrastructure. In October the city of Hutto signed a $59 million contract to obtain its own water system, a move the city says will save residents hundreds of millions over the next four decades.

Hutto has also been footing the bill for infrastructure in incentives packages with the developers of Innovation Business Park and the Co-Op District. Between the two projects, Hutto is responsible for more than $20 million in infrastructure improvements, utility connections and runoff basins. Williamson County agreed to invest an additional $5.5 million in a tax increment reinvestment deal for the Co-Op District.

“We have an obligation to those partnerships and investors that we want them to be successful so we can be successful,” said Hines.

Jones expects the city to get a return of more than $100 million in tax revenue combined through those developments, but the full returns are decades away.

City staff also rewrote Hutto’s zoning codes in order to bring in more developers and businesses, make it easier for developers to build and keep the environment economically attractive to retain businesses.

Landscaping mandates that were considered tedious, per Jones, were eschewed. The engineering department pushed for new codes that allow flexibility for pipe maintenance. Overall, the city has cut the length of its planning process from 14 to 20 days to four to seven days.

“We want to create more commercial and retail development so it puts us in a position to lower the tax burden on our residents. We knew, in order to do that, we’d have to do some investments,” Jones said. “The city is starting to see a return on this investment, and I’m optimistic that our plans will be successful.”