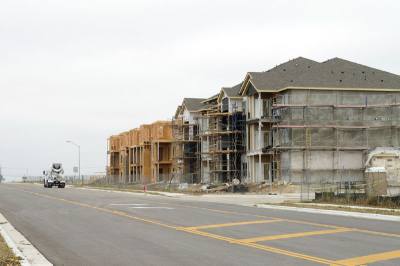 As new commercial and retail developments break ground in the area, homes for new employees must also be built.

On Oct. 24, the Pflugerville City Council approved a special use permit for the development of the Stone Hill Luxury Apartments northwest of the intersection of Pflugerville Parkway and Pfluger Farm Lane. Kurt Goll, president of JCI Residential and developer of the project, said the complex would meet a demand in Pflugerville.

“We try to fill a housing need—not everybody is interested in buying a house,” Goll said. “That ranges from people who are downsizing to young couples, or singles that are not yet ready to buy a house.”

JCI Residential was also behind the development of Highland Luxury Apartments, a 292-unit complex on Heatherwilde Boulevard. Goll said that occupants started moving onto the property in March 2017 and it was leased up very quickly.

The success of the Highland complex, Goll said, reflected a need in Pflugerville for apartments available to renters.

“Rents are steady, occupancy is steady, and the numbers appear to indicate a demand for new rental housing stock — and that’s a demand we’re trying to fill.” Goll said.

Nationally, multifamily housing projects hit a high of 386,000 in 2015, the highest level since 1987, according to Mark Obrinsky, senior vice president of research and chief economist for the National Multifamily Housing Council.

Although the numbers are gradually tapering off, Obrinsky said, they are still significantly higher than any time between 1989 and 2013.

According to data from the National Multifamily Housing Council, Austin has the sixth highest number of occupied apartments in the country, reflecting a high level of demand for multifamily housing in the area in comparison to other large cities across the country.

Obrinsky said the level of  demand could be attributed to a number of factors. Typically, he said, young people are most likely to rent apartments, but more people are making the choice to rent in multifamily units to avoid the upkeep that comes along with maintaining a single-family house or owning a home.

Assistant City Manager of Pflugerville Trey Fletcher said the demand for multifamily housing in the area is cyclical and depends on the saturation of neighboring communities as well as employment opportunities in Pflugerville.

“Pflugerville wants to attract business, retail and tech centers and fill the [SH] 130 and [SH] 45 corridors with businesses, and we want to provide housing to help them meet that goal,” Goll said.  “You can’t attract a 200-person tech company to your city if you don’t have housing for 200 people readily available, and not everybody is just going to come buy a house in Pflugerville. If there’s not an option like the property we’re proposing available, they will go to Round Rock or Austin or elsewhere and add to our traffic problem.”

“We think there is a need in Pflugerville for luxury rental units,” Goll said. “There are a lot of single-family housing options and ‘for sale’ options, but there have been regulations in place that have slowed the growth of apartment building in Pflugerville.”

According to the city of Pflugerville’s Unified Development Code, all multifamily housing developments must meet a series of requirements in order to be built in the city. The code dictates things like the building materials, percentage of windows on a building’s façade and the number of bedrooms each unit should offer.

One requirement unique to Pflugerville stipulates that each multifamily development must provide one garage for every two units. Goll said this requirement, in particular, slows the development of multifamily housing in the city.

City of Pflugerville Planning Director Emily Barron said that most of the multifamily housing development requirements currently in place in Pflugerville resulted from a revision of the UDC in 2008.

The revision came after a series of rezonings generated a level of concern and interest in multifamily developments. Many of the requirements, Fletcher said, aim to curb those concerns.

For example, one of those requirements stipulates that each multifamily housing development must have at least 40 percent one-bedroom units and a maximum of 10 percent three-bedroom units. This requirement is in response to past concerns from the community about over-populating nearby schools, according to Fletcher.

“Having those bedroom count requirements will help to moderate or mitigate that concern,” he explained.

However, some feel that those requirements don’t go far enough.

At the Oct. 24 meeting of the Pflugerville City Council, Mayor pro tem Omar Peña and councilmember Mike Heath  requested that the council revisit the requirements for apartment construction in Pflugerville. Peña said his main concern is parking, despite the attached garage requirement.

“What I consistently see when I drive around apartment complexes here is a lot of vehicles parked in the street,” Peña said. “People have garages that are technically used for parking, but are often used for storage so there is a lot of spillover in parking.”

Peña requested that the council discuss apartment development requirements with specific attention to parking, but said the process should not be rushed and will take time to address.

Down the road in Round Rock, city policies are in place to curb the development of traditional apartment complexes, according to Brad Wiseman, the city’s director of planning and development services.

“The city has adopted policies that make it a little tougher to get new zoning for new traditional multifamily projects, so I think that will lessen some of the growth in multifamily housing in Round Rock,” Wiseman said.

Wiseman said that there are existing entitlements, or properties that have already been zoned for multifamily housing, which are likely to be built out over the next few years, but he does not expect to see many new projects come online.

“We’ll see existing entitlements get built out as the years go on, but in Round Rock we will not see a rapid increase in multifamily rental housing because new entitlements are going to be few and far between,” Wiseman said.

Behind that anticipated decrease, Wiseman said, are policies that the city specifically put in place to slow the development of multifamily housing.

“About six years ago, in response to the tremendous growth that we have seen in multifamily housing, there were policies put in place by the City Council to limit the amount of new zoning and to ensure that it was going to be done in a way that was compatible with surrounding areas,” Wiseman explained.

Those polices require new zonings for multifamily housing to be at least 500 feet away from single-family neighborhoods and at least half a mile away from any existing apartment complex or vacant property that has already been zoned for an apartment complex. The exception to these restrictions, Wiseman said, is high-density, urban-style housing. La Frontera Square is the only existing location that fits this category in Round Rock, but Wiseman believes more will develop in the future.

“By encouraging that style of apartment project, we believe that is a key tool in our economic development objective that will provide good housing stock for businesses looking to move to Round Rock or build a new facility and expand,” Wiseman said. “[Excluding that type of housing from the policies] was done specifically because we view those projects as a little bit different.”

One such project, Wiseman said, is The District, the plans for which were announced in November. He explained that these types of projects typically are located in areas where there are services and employment centers and tend to attract younger buyers, who he said are attractive to employers.

Wiseman said that Round Rock’s primary vision, however, is single-family housing.

“Our predominant housing type is single family – that’s the vision of City Council,” Wiseman explained. “We certainly want to diversify housing stock with multifamily and mixed-use but keep our existing character that has served Round Rock well over the last several decades.”

In Hutto, Planning Director Carolyn Horner said prior to spring of this year there were no traditional apartment complexes in the city. But like their neighbors, Hutto city officials expect this to change as the population in the area grows.

“With the population growing so much, there’s a need for more diversity of housing,” Horner said. “Hutto has traditionally had more single-family neighborhoods, but now the growth pressing from Austin has made it to Hutto.”

Currently in Hutto, there are two existing four-plex apartments and one community with 24 units. Another development is currently under construction and will offer 310 units. Single-family developments, on the other hand, have remained very active, Horner said.

Goll is now working on a site plan submittal and permitting process for both the site and building permits for the Stone Hill Luxury Apartments. If all goes well, he expects to break ground on the property in March 2018 with the first units ready for occupancy in January 2019.

If the project is successful, Goll said, he would be interested in continuing to develop multifamily housing in Pflugerville.

With commercial and retail developments on the horizon for the city, it appears that the market for multifamily rentals will remain steady.
SHARE THIS STORY