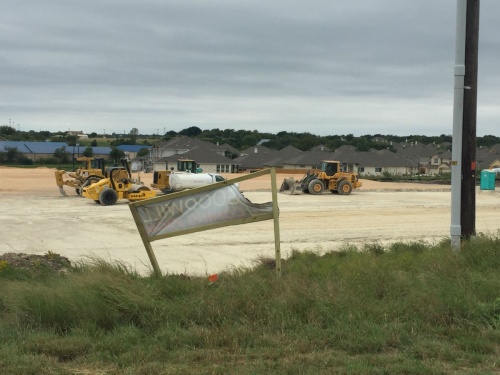 A new Goodwill building is coming to Hutto at the corner of Priem and FM 685.

A number of construction projects are underway throughout Hutto, including along FM 685 south of Hwy. 79.

The developments range from business parks to luxury apartments, retail and residential space.

Preliminary construction is underway on a mixed-use retail and restaurant development along Chris Kelley Boulevard between Carl Stern Drive and Hwy. 79.

The project will be developed by CBRE Group Inc., a real estate service and investment firm.

The residential developments in Carmel Creek include a luxury apartment community with 123 future multifamily homes to be built by Ohio-based M/I Homes as well as 310 apartment units built by CMC Commercial Realty Group, based out of Dallas. Carmel Creek by Pulte Homes is currently offering single-family houses off Carl Stern Drive.

“We’ve got a population with a median age of 33. We’ve found that they are interested in houses and they would like a place with access to metropolitan area, but they enjoy a quiet place like Hutto,” Hutto City Manager Odis Jones said.

There are more than 700 lots earmarked for retail, residential or restaurant use in the area between FM 685 and SH 130, stretching from Hwy. 79 to an area just north of the Brushy Creek riverbed. The development will include a parkland that runs through the neighborhoods and a trail that runs parallel to Brushy Creek. A series of trails will run through the development, stretching from parts of the residential areas to the northern bank of Brushy Creek.

There are more than 13 acres of land set aside for future development in the northwest corner of Carmel Creek, though no development is yet planned for the space.

Austin-based commercial real estate developer Retail Solutions broke ground in September on Hutto Plaza, a mixed-use office site on the east side of Chris Kelley Boulevard, south of Carl Stern. Preston Wolfe, commercial adviser for the property, said one of the two buildings will be a multistory development, and the estimated completion date is March. No leases have been signed for the site yet.

Retail Solutions is also currently building up Star Ranch Market, which will open in the first quarter of 2018 and is located just north of the H-E-B Plus on southbound FM 685 in Hutto.

Three leases have been signed for spaces in Star Ranch Market, including a nail salon, an Asian cuisine restaurant and a Great Clips salon.

A new Goodwill retail store will open a Star Ranch-area location built along southbound FM 685 at Priem Lane in Hutto.

Land is being cleared for the new building on the north side of the intersection, which is just west of SH 130 and south of Gattis School Road. Per the project permit, the construction anticipates an end date of March 22.

Construction is also now complete on Muirfield Bend, a new road that borders the Golf Club at Star Ranch and runs behind H-E-B Plus, connecting FM 685 to Gattis School Road.