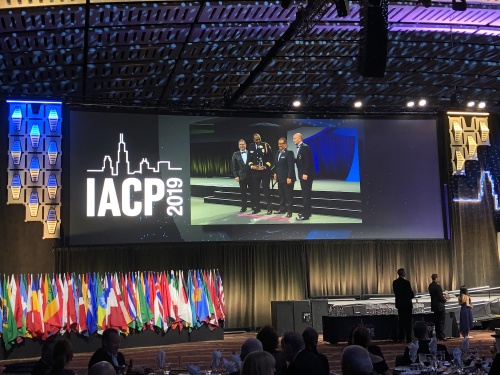 Round Rock Police Department was recognized as the 2019 Leadership in Crime Prevention winner by the International Association of Chiefs of Police at its annual banquet Oct. 29.

The Round Rock Police Department received international recognition for its Operation Front Porch program in October.

Operation Front Porch, which is entering its third year of operations on Nov. 8, allows residents to ship their packages directly to the RRPD while they are traveling or out of town for the holiday season.

For these efforts, RRPD won the 2019 Leadership in Crime Prevention distinction from the International Association of Chiefs of Police, according to an Oct. 30 news release.

RRPD Chief Allen Banks attended the IACP's annual banquet, held in Chicago on Oct. 29, and accepted the award on behalf of his department. The Leadership in Crime Prevention award, first introduced in 2018, recognizes "innovative, data-driven, low-cost, and high-impact crime prevention programs that build community trust and increase community engagement," per the release.

“We are honored for Round Rock to be recognized internationally for this program,” Banks said the release. “Operation Front Porch began as an idea to prevent package theft and it has grown to become a valuable service for our citizens. The program gives residents one less thing to worry about during the holiday shopping season.”

RRPD's Operation Front Porch program has grown in its first two years of operations, from 30 packages accepted in 2017 to 380 in 2018, according to the release.

With the rise in package thefts occurring during the holiday season, RRPD officials said the program allows for residents to securely have their packages delivered while officers can allocate resources to other calls for services.