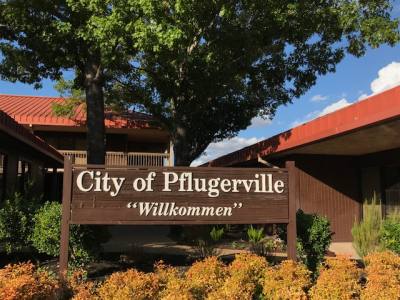 Pflugerville City Council approved a rezoning request for the Lisso tract, a nearly 200-acre property adjacent to Immanuel Road that will be used for an upcoming mixed-use development.

But the decision to rezone the agricultural land for an upcoming mixed-use development project has not been without controversy.

Several residents have spoken out against the development before Pflugerville’s Planning and Zoning Commission and council as part of the Save the Gatlinburg Greenbelt group, voicing their concerns regarding environmental impacts to the area’s greenland and flood plains as well as heightened traffic and congestion along Immanuel.

Ryan Mattox of William Lyon Homes presented before council at its Oct. 8 meeting and said the proposed development aligns with the city’s comprehensive plan, transportation plan and compatibility standards for zoning requirements as well as has been approved by planning and zoning. He added that following council’s initial rezoning request denial in February, William Lyon has had time to revisit the proposal with residents and construct a more suitable proposal.

“We’ve taken that time to do a little more homework,” Mattox said Oct. 8. “We wanted to take their concerns very seriously.”

But for some residents living in the adjacent Gatlinburg community, they said the now approved development results in an immediate loss of greenbelt, or undeveloped wild land surrounding urban communities.

Shannon McClenny, a Gatlinburg neighborhood resident, spoke against the proposed rezoning request at the Oct. 8 council meeting, arguing that an increase in traffic and congestion would negatively impact residents' quality of life.

"How many citizens have to have concerns before you choose people over profit?” McClenny said.

Dwain Selman, owner of the Lisso tract, said he disputes the categorization of his property as greenbelt given that it is private land and can be developed as warranted.

During the ordinance's final reading Oct. 22, several residents spoke in favor of the rezoning, specifically the opportunities it would bring to revitalizing Immanuel through the developer's contributions to construction costs.

“I think we have a great opportunity here," said Dan Seligman, a Gatlinburg resident. "I see this as being an improvement to my neighborhood, just as being adjacent to it.”
SHARE THIS STORY