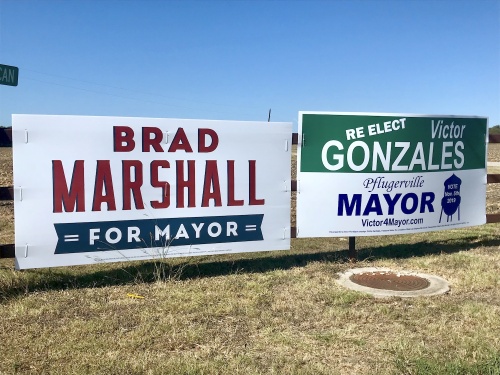 Population growth, infrastructure, economic development and public safety are among the top priorities for Incumbent Mayor Victor Gonzales and Brad Marshall, each said, as the two head into Pflugerville's mayoral election in November. The Pflugerville Chamber of Commerce hosted the city's second mayoral debate Oct. 8 during its monthly luncheon, where both candidates discussed their proposed solutions on how Pflugerville can best handle residential and financial concerns as its population steadily grows.

Both Gonzales and Marshall pointed to the influx of residents moving to Pflugerville in recent years as a benefit to both the city's community spirit and economic vibrancy, while also addressing the city's responsibility to remain attentive to citizens' needs and priorities.

"Growth has got to be delicate. We have to be attentive to the types of projects coming to Pflugerville," Gonzales said. "Are they in the right place at the right time?”

Gonzales also addressed some residents' concerns about the city maintaining its "small and quaint" feeling as it continues to grow, and said that "old town flavor" can still be felt in the city's downtown area. He added that a number of individual businesses and development projects, from Costco to Stonehill Town Center, have invested in Pflugerville's community and benefit from collaborative relationships with the city to stay and grow.

When it comes to growth, Marshall said Pflugerville needs to consider what the city's growth means to prospective businesses and how to better facilitate those relationships.

"We should manage it extremely careful. We have seen unprecedented growth here in Pflugerville," Marshall said.

Marshall pointed to his time on Pflugerville City Council when city staff was putting out unified development codes for local businesses. Marshall said he helped stakeholders from the business community provide feedback to better maximize the effective of the new codes. Managing overall growth, Marshall said, is best handled by removing "red tape-type of bureaucratic things" and provide builders with the tools needed for success.

Along with population growth, candidates said, come significant questions regarding how Pflugerville can most effectively balance the costs and services related to improving its infrastructure.

"The infrastructure is critical, critical to growth," Gonzales said.

Gonzales said that he wants to improve the city's infrastructure while also easing the tax burden on residents. Stimulating economic growth with an increase in the number of businesses paired with their engagement with the greater community, Gonzales said, is the best way to grow the city's retail tax base and manage the city's budget more effectively.

Marshall said increased sales tax revenue should be the primary way to offset property taxes and create economic stimulation to better fund infrastructure costs. Marshall spent five years on the city's finance and budget committee and said that while the city has been "fairly conservative" in its budget process and tax rates in recent years, residents are still feeling the effects of increased appraisal rates hitting their wallets.

He added that he wants to see if it is possible for Pflugerville city staff to be even more conservative with its budget and tax rates in upcoming cycles.

"The only way I’m going to know is to get back in there and do the same thing I was doing three and eight years ago," Marshall said.

Police services make up 34% of Pflugerville's adopted fiscal year 2019-20 budget, the largest of the city's general fund expenditures. Both candidates pointed to the importance off ensuring adequate funding for Pflugerville Police Department services and resources.

“Our police need to remain funded strongly in order to keep up so they’re not struggling to provide the hardware and manpower," Marshall said. He added that as surrounding communities continue to grow, the city must address concerns of crime spilling over and the need to have a substantial number of officers and to have mitigating resources available.

Marshall also commended the "great leadership" of Police Chief Jessica Robledo and her work in maintaining a strong relationship between the police and residents.

Gonzales similarly praised Robledo for her work leading the department, adding that her network of connections with surrounding communities and forces have helped to continually elevate Pflugerville Police Department's work.

"Our police chief has made some dynamic changes in her department," Gonzales said.

While PPD does have talent and resources available to its current workforce and continues to recruit new members, Gonzales said officers are still often working 12-hour shifts and need more down time.

Gonzales added that with public safety comes the need for police officers to continually get involved with neighborhood organizations and attend community events and, in turn, to become an even more visible part of Pflugerville's growing community.