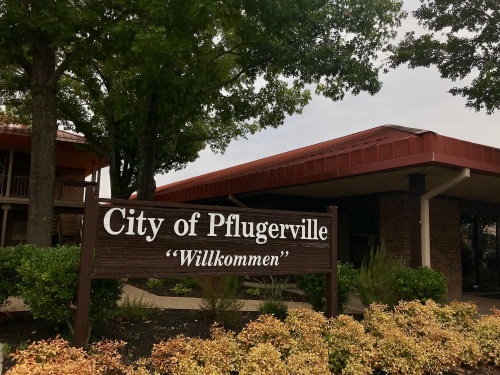 Pflugerville City Council voted 7-0 in favor of setting its maximum property tax rate for fiscal year 2019-20 on Aug. 27, listed at $0.5045 per $100 of taxable value. If approved by council Sept. 24, the proposed rate would formally be adopted for the upcoming fiscal year, beginning Oct. 1.

The adopted tax rate for fiscal year 2018-19 was $0.4976 per $100 of taxable value. The current proposal up for consideration is also listed as the city’s rollback rate, which is the highest a city can raise its property tax rate without voter approval.

Former Mayor Jeff Coleman was the first resident to speak during the public hearing, asking council to act on the city's "tradition" of maintaining or lowering its property tax rate year over year.

During his tenure as mayor, he said the city abided by a self-inflicted policy "to come hell or high water to drop the tax rate by half a percent" each fiscal year.

“We were still as conservative as we could be while understanding we had bills we had to pay," Coleman said, later adding, "that took courage."

Timothy Bradberry, a Pflugerville resident, acknowledged cities get their money from citizens, but that it is within a city's responsibility to do so with prudence.

"It’s right to be tight with all your might," Bradberry said.

Lenette Peterson, a board member on the city's Parks & Recreation Commission, pointed to the number of residents who had expressed fears of potentially having to sell their homes if the proposed tax rate increase is adopted.

Following council deliberation regarding potentially lowering the scope of the proposed budget during its Sept. 10 meeting, City Manager Sereniah Breland proposed adding an agenda item for discussion and potential action on reevaluating a reduced cost budget proposal. The item will be discussed during the council's Sept. 17 meeting.

Pflugerville City Council will hold its second and final public hearing on Sept. 17 at 6 p.m., located in City Council Hall at 100 E. Main Street, Ste. 500. The final adoption of the tax rate is scheduled for Sept. 24.

"I definitely appreciate your feedback, your input, your thoughts and your concerns," Mayor Victor Gonzales said, "because you are Pflugerville.”