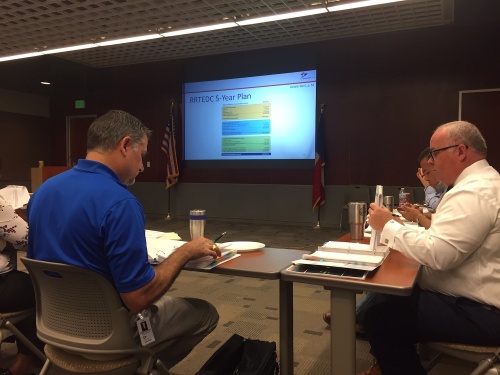 The average Round Rock homeowner could see his or her property tax bill increase by about $9 a month if the city’s budget is adopted as proposed Aug. 8.

Round Rock City Manager Laurie Hadley and Chief Financial Officer Susan Morgan presented a preliminary $444.7 million city budget and a proposed tax rate of $0.439 per $100 of taxable value to Round Rock City Council on Aug. 8.


Breaking down the budget

“We are absolutely delivering strategic goals in this budget,” Hadley said.

Maintaining city services while keeping up with growth is a key budget driver, Hadley said. Core services funded by city budgets include public safety, transportation, parks and recreation, among others.

“Most of this [increase] is funding police, fire, roads,” Round Rock Mayor Craig Morgan said. “This is going back to protecting and benefitting our citizens. I can’t stress that enough. These services are all for [the taxpayers].”

To balance the budget, the city is evaluating a proposed tax rate of $0.439 per $100 of taxable value. This represents a $0.04 increase over the effective tax rate, which compares tax rates based on existing property values from the previous year, Susan Morgan said.

Approximately $367 million of new property value was added to the tax rolls since last year, according to city documents. This additional value will generate $1.6 million of property tax revenue.

The median home value in Round Rock for FY 2019-20 is $255,198, according to the Aug. 8 presentation. Based on this data, the average homeowner will pay about $93 per month in the city’s portion of property taxes next year, Susan Morgan said.

The city of Round Rock offers a tax calculator for homeowners to estimate their property tax bill. Access the resource here.
SHARE THIS STORY