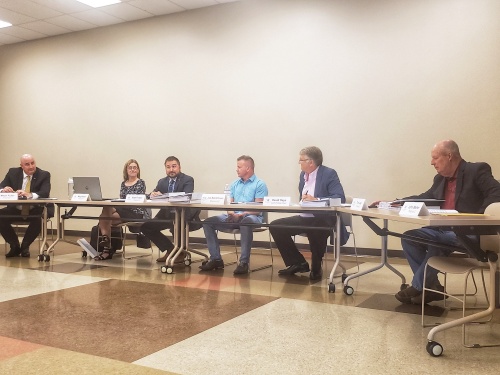 The Williamson County Bond Committee heard road and park requests for Precinct 1 on May 21.

The Upper Brushy Creek Water Control and Improvement District is looking to partner with Williamson County to develop flood reduction projects along the SH 45 Toll and O’Connor Drive.

Alysha Girard, the general manager for Upper Brushy Creek, presented a plan to the Williamson County Citizen Bond Committee on May 21 that would help reduce flooding in the area and improve trail and transportation connectivity as well as establish open space to offset nearby growth.

The plan would be a partnership between Williamson County, the city of Austin and the city of Round Rock.

Girard said as Robinson Ranch in Austin is developed, the area has seen an increase in flooding. The plan has a dam built along O’Connor Drive and establishes 232 acres of park land and 490 acres of preserve area.

Girard added there is potential for four-lane and two-lane roadways through and along the park.

Round Rock resident Tracie Storie said she has lived in the area for 27 years and is in favor of the idea of a park and preserve space, especially if it addresses flooding.

“Great cities are known for their great park,” Storie said. “Trails are such a wonderful thing … and the fact that it will alleviate the flood plain is a good thing.”

The bond committee, made up of nine members, will hear project proposals in each of the county's four precincts and make a recommendation to the Commissioners Court on whether a roads and parks bond should be called and what projects should be included. The commissioners will decide whether to accept or deny the recommendation.


Other projects requested at the meeting: