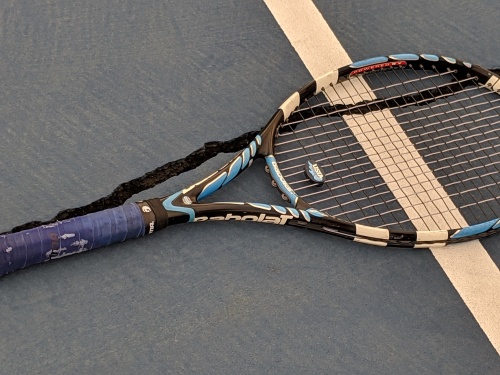 Cracks with widths of up to an inch are spreading across outdoor tennis courts in Round Rock.

Outdoor tennis courts in Round Rock are cracking, due to a years-long combination of drought-like conditions followed by heavy rainfall, according to Round Rock Parks and Recreation Director Rick Atkins.

Round Rock City Council on April 23 voted to spend $138,000 on a new tennis court surface at Clay Madsen Park on Gattis School Road.

“We’re in a position where we really need to replace it for safety issues,” Atkins said.

Other courts in Round Rock are in need of the same work. Yogi Reagor, President of the Round Rock Tennis Association, said all 12 courts at Old Settlers Park on Palm Valley Boulevard are showing cracks with widths of up to an inch.

Hairline cracks started forming about 10 months ago on one bank of courts, Reagor said, and now all 12 courts are affected. A resurfacing repair alone will not do the job, she said.

Repair of all the courts at Old Settlers could cost around a million dollars, Atkins said.

“We’re going to have to do something significant,” Atkins said. “It’s no longer coming in and saying ‘hey, we’re going to resurface the tennis courts,’ which is a much cheaper fix.”

For both Clay Madsen Park and Old Settlers Park, Atkins said repair will include a switch from an asphalt surface used in the past. He said the new surface will be concrete with a post-tension cable structure---often used in home building---over the top of a five-inch overlay, which he said will be more stable than asphalt.

Atkins said the city allocated about $250,000 to repair one bank of courts at Old Settlers Park with a hopeful end-of-year completion date. He said he hopes to see repair for the other two banks over two budget years as the city works to secure additional funding.

In the meantime, Reagor said most courts at Old Settlers stay busy with ladies' tennis on Monday nights, men’s doubles on Tuesdays, mixed doubles on Wednesdays and Thursdays and open courts for the public on Fridays.

However, this schedule could come to a halt should courts continue to go without repair.

“I’m afraid someone’s going to get injured out there,” Reagor said. “It may come to the point where they close a bank of courts because that’s how bad they’re getting.”