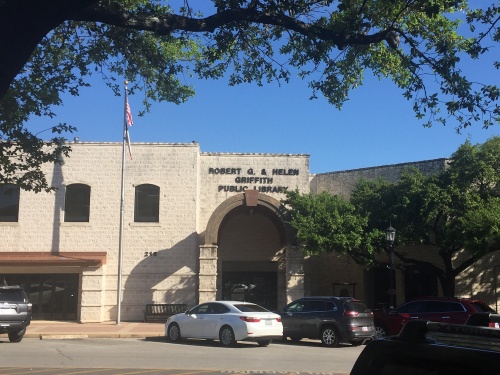 The Round Rock Public Library opened at its current location, 216 E. Main Street, in 1980. Plans are underway to build a new public library about a block away.

A block in downtown Round Rock is one step closer to being secured for the city’s new public library. Round Rock City Council on April 11 approved a real estate contract to purchase the land for $4,450,000.

The new 60,000-square-foot library—anticipated to be complete in January 2023—will be constructed one block north of the existing 43,000-square-foot facility at 216 E. Main Street.

“We are excited to keep this important public space in the heart of our downtown—this is going to be a legacy project that our community can enjoy for decades to come,” Library Director Michelle Cervantes said in an April 11 news release.

Round Rock voters in November 2013 approved $23.2 million of bond funds to build the new library.

“This is a special night,” Mayor Craig Morgan said April 11. “It’s important to [the City Council] that this is coming to fruition. Sometimes patience does pay off.”

The land secured Thursday night is comprised of what had been six separate tracts of land, owned by three members of the same family—Joe Douglas Johnson, Camilia Nicole Johnson and Corey Johnson, according to city documents.

Future plans for the existing library building have not been released at this time.

“My fondest memories as a child are at the library,” Council Member Tammy Young said. “It’s wonderful now to see my grandchildren at the library now. Everything you do is so wonderful and so valuable.”

The land purchase passed on a 6-1 vote, with Young voting against the real estate agreement.

“I am 100 percent supportive of all [the library's] efforts,” Young said. “It is the price that is driving my vote tonight.”

Editor's note: This post has been updated to reflect the city's revised timeline and location of the new library.