Round Rock poised for more economic growth in 2019 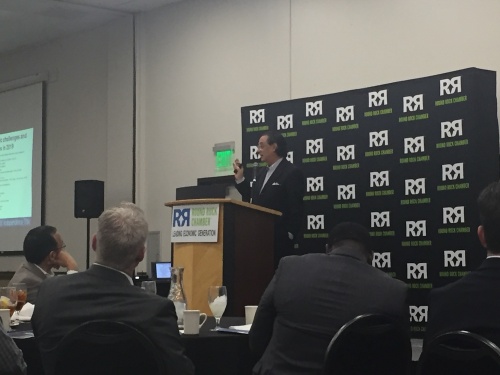 Mark Sprague, director of information capital at Independence Title, shared a 2019 economic outlook with the Round Rock Chamber on Feb. 26.

More economic growth is on the horizon for Round Rock and the Austin metro as a whole, according to Mark Sprague, director of information capital at Independence Title.

“The demand, the desire to be in Round Rock, to be in the Austin area, is higher than any place else I’ve seen in the United States,” Sprague said during an annual economic overview at a Feb. 26 Round Rock Chamber lunch.

In light of a growing list of regulations in Austin and Travis County, Round Rock and Williamson County are increasingly viewed as friendlier to do business, he said.

“My biggest concern with Austin is regulations,” Sprague said. “For every other metro in Texas, the entitlement process is measured in weeks. In Austin, it’s measured in years. That will continue to be a bigger and bigger issue.”

Nationwide, key indicators of the economy—including job growth and gross domestic product—remain strong, he said. In fact, the country is in the midst of its second-longest period of economic growth ever.

If trends continue—and Sprague said he believes they will—in six months, this could be the longest economic expansion in history.

“We will continue to see growth,” he said. “We’re ten years into this, and I’m telling you I think we have five more good years. We’re in a phenomenal place.”

In 2019, Sprague predicts employment growth in the Austin-Round Rock Metropolitan Statistical Area between 1 percent and 2 percent. Real estate sales will mirror or exceed 2018, he said, with home values continuing to rise.