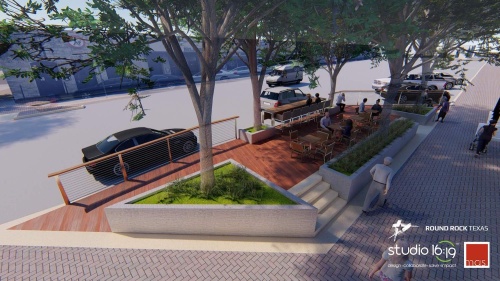 A rendering of initial design plans for the Main Street improvement project.

Round Rock City Council voted unanimously to approve a design contract with Studio 16:19 for the Main Street improvement project.

The project will include six parklets on East Main Street between Mays and Sheppard streets. The preliminary plans include sidewalk upgrades, lighting, seating and greenery along Main Street.

“Some pretty significant changes and improvements are coming to the downtown area to make it a strong asset for our city,” Mayor Pro Tem Writ Baese said at Thursday night’s meeting.

The city hopes to have final design plans approved by the end of the year. If those plans are approved, construction is expected to begin early next year and to be completed by the spring.

The council voted unanimously to submit an application for a federal grant to expand the Transit Center parking garage located in downtown Round Rock at 300 W. Bagdad Ave.

The plans for the garage include adding three additional floors and retail business space on the garage's first floor.


3. The council takes next step for roadway impact fees

Roadway impact fees are one-time costs required of developers to go toward projects to improve transportation infrastructure. A standard fee rate would be approved by the council.

On Jan. 11, the City Council approved a contract with Kimley-Horn and Associates Inc. for the creation of a roadway fee implementation plan. The July 26 regular meeting was the first of two public hearings required during the process.

The study will be completed by Aug. 6 and an open house is scheduled for Aug. 7. A public hearing for the impact fee rate is scheduled for Sept. 13 and a draft ordinance could be presented to the council in the fall.


4. Round Rock police to get towing management logistic service

AutoReturn acts like Uber or Lyft for tow trucks, Round Rock Police Department said. The police department hopes the service will reduce the time it takes to clear accident scenes by locating the nearest tow truck and calling it to the accident scene.

Citizens whose vehicles are towed will be able to locate the appropriate lot to retrieve their vehicles on the AutoReturn website.

The council voted unanimously to approve an engineering services contract with Luck Design Team for improvements to trails in the Round Rock West and Behrens Ranch greenbelts.

The projects would include replacing the deteriorated trails with concrete trails.