Fourth of July events still planned in Round Rock, Pflugerville and Hutto 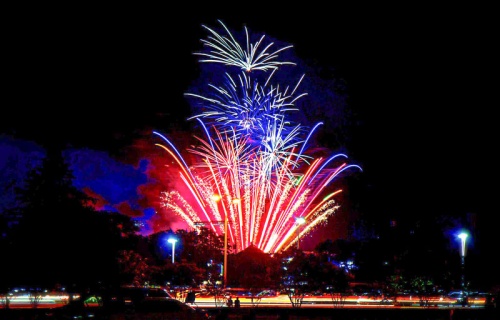 Fourth of July events are underway in Round Rock, Pflugerville and Hutto.

Fourth of July events in Round Rock, Pflugerville and Hutto are still scheduled to take place, even though it rained much of the afternoon.

The Williamson County Sheriff’s Office responded to reports of a small tornado that did minor damage near Limmer Loop and CR 110 in Hutto. Several power outages were reported in Pflugerville and Hutto this afternoon due to the storms. But the weather is expected to be better for evening events.

Round Rock continues its day-long Frontier Days celebration that began with a parade this morning. Events through the evening at Old Settlers Park include swifty swine pig races, Sam Bass shootout, free ice cream served by city council members, a performance by the Austin Symphonic Band and fireworks. Other events are weather permitting. A movie in the park, “Star Wars: The Last Jedi,” will follow fireworks. More information about the festival can be found here.

The city of Pflugerville still plans to hold its annual Pfirecracker Pfestival, which is scheduled from 5-9:30 p.m. at the Pfield in Pflugerville. The event includes a large children’s area, food trucks, live music and fireworks. A reminder that no umbrellas are allowed. Other banned items and products include alcohol, tobacco products, pets and coolers. Only clear bags and bottles will be allowed. Diaper bags, purses and backpacks are only allowed if they are clear. More information about Pflugerville’s festival can be found here.

The city of Hutto has its 4th of July celebration at the new Hutto Park at Brushy Creek. The event began at 4 p.m. and goes until 10 p.m.

More information about Hutto’s festival can be found here.

Rain and storms developed after 2 p.m. The same storm system flooded parts of Houston and caused officials to evacuate the crowd at Willie Nelson’s Fourth of July Picnic at Austin360 Amphitheater in Austin. Fox 7 Austin reported rain would decrease toward the start of fireworks.

Community Impact Newspaper will report any changes in the schedule for tonight.
SHARE THIS STORY