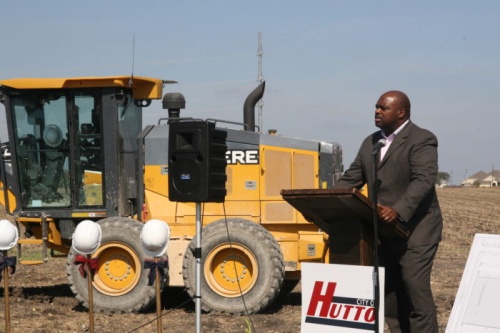 Hutto City Manager Odis Jones was named one of four finalists for the city manager position in Aurora, Colorado, according to a notice posted by Aurorau2019s city government.

Update July 2, 6:10 p.m.: Hutto Mayor Doug Gaul has released a comment responding to the news that City Manager Odis Jones is a finalist for the city manager position in Aurora, Colorado.

“Odis has rebuilt the organization and brought together a talented and capable executive and leadership team,” said Gaul in a statement Monday night. “He has done an outstanding job here in growing the organization, driving economic development, and building a deep bench in terms of talent within the organization.”

“We would hate to lose him, and while it comes as no surprise that he is sought after and in demand, we’d obviously prefer he stay here in Hutto," Gaul said.

Original post: Hutto City Manager Odis Jones was named one of four finalists for the city manager position in Aurora, Colorado, according to a notice posted by Aurora’s city government.

The notice named Jones alongside three other candidates. Aurora is hosting a meet and greet with Jones and the other finalists July 13, with a council vote to approve the final hire to come at a later date.

Aurora is a suburb of Denver and has a population of more than 350,000.

Jones declined to comment and Hutto Public Information Officer Eliska Padilla commented that city council members are aware that Jones is being considered for the Aurora city manager position.

He moved to Hutto from Michigan, after serving as Detroit’s CEO of the public lighting authority. Jones also was the city administrator in Obetz, Ohio, and the executive director of development for Cincinnati.

“I’m truly humbled and I’m truly excited about Hutto,” Jones told Community Impact at the 2016 meeting. “There are great people here. You feel it. It’s a loving community. As a Christian man, it feels good to be here.”
SHARE THIS STORY