Hutto City Council Thursday night authorized City Manager Odis Jones to execute an amended Memorandum of Understanding, or MOU, with the developer of the Star Ranch subdivision, bringing a contentious negotiating period between residents and the developer to a temporary close.

The amended MOU gives the city expanded authority in the development of Star Ranch, which is located in Hutto's extraterritorial jurisdiction, including forcing Tack Development to present a new concept plan for the development.

However, state law limits the city’s ability to enforce any zoning authority in Hutto's ETJ, according to Hutto City Attorney Michael Shaughnessy. Per Shaughnessy, the city can only enforce platting plans.

“As frustrating as that is, that’s the scope of our authority,” Shaughnessy said.

An MOU was signed between the city and Tack Development in February 2018 after the developer began building townhouses in an area that was originally platted as commercial space in the original concept plan for Star Ranch.

Delivery of the amended concept plan was delayed until the developer met with residents during May 8 and June 5 Hutto Planning and Zoning Commission meetings, according to city documents.

The developer made several concessions during negotiations for the amended plan, according to city officials, including moving retail space away from Gattis School Road. The amended MOU will now force the proposed commercial development in Star Ranch to occur along SH 130.

Shaughnessy stated the amended MOU also forces Tack Development to use the city’s inspectors and reimburse the city for the inspections — guidelines the developer was not previously mandated to follow.

“I know that residents are frustrated with what's out there,” Shaughnessy said. “I will say to you, we negotiated the best deal we could and we got the city the most authority we could get.”

Two Star Ranch residents commented on the amended MOU prior to council’s vote, expressing discontent with the developer.

“I am disappointed that we as residents were promised a plan for our community at Star Ranch that will now not happen,” said Renee LaFrance, a Star Ranch resident.
SHARE THIS STORY 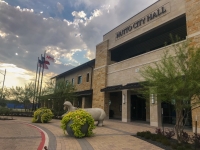