PHOTOS: Size of Round Rock cave found after collapse gets bigger 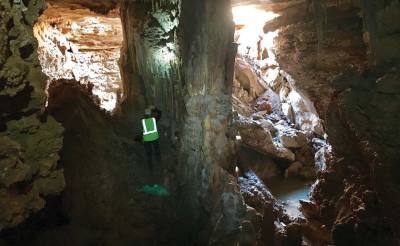 A view of the interior of the cave.

Engineers specializing in caves and sink holes returned Monday to a Round Rock neighborhood to assess what last week's road collapse revealed.

A fourth but smaller chamber was discovered after the crew got inside. The entire cave is now estimated to be about 200 feet long. Several formations in the cave were damaged when part of Cambria Dr. collapsed. Those that were removed will be studied.

Three homes located on top of the cave or directly next to it remain a more pressing concern for county officials. None are believed to be in any immediate danger of falling into the cavern. The ceiling of the cave is at least 5 feet thick and appears to be stable.

"It will be several weeks, at least, because we are working with the Texas Commission on Environmental Quality to determine what the best path is moving forward, and we are going to go over all the options with them to come up with a solution, so it will take several weeks," said Williamson County spokesperson Connie Odom.

Filling the cave with concrete and gravel is a possible mitigation option. That was done back in 2013 when a cave was found by road crews expanding RM 620. It was a little smaller than this one under Cambria Drive.

Williamson County has about 700 documented caves. This one is located near a middle school and is along RM 620, near the intersection of Great Oaks Drive. It's about half way between the cave found back in 2013 and the one that’s over in the neighborhood. Most of the caves are gated and locked to keep people out and to protect the endangered species that live in the caves.

"And every time a new construction area occurs we often, the developer, hits news features and new caves," said Boyd.

The Cambria Dive cave is not on any maps the county currently has so it’s not known if anyone was aware it was there when the subdivision was developed. It’s believed a water line trench cut into the ceiling of the cave several years ago and that vibration from the road triggered the collapse.