As ground breaks on new manufacturing headquarters in Hutto, city officials in discussions to bring California companies to Texas 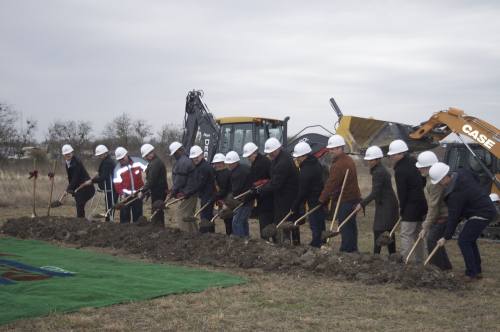 Executives from JRS Company Inc., a manufacturer of sign frames and holders currently based out of Covina, Ca., were joined by city of Hutto and Williamson County officials at the groundbreaking ceremony.

“This is a great time to welcome another business to Hutto,” said Hutto Mayor Doug Gaul.

JRS Company is building a 50,000-square-foot facility in the Burge Business Park, a new development east of FM 1660 in Hutto.

The manufacturing headquarters will be the first tenant to begin operations in the business park. JRS Company is moving its entire operations from California, where the company has been headquartered since 1962.

At least 25 families are moving with the company to Williamson County and, according to city officials, the new JRS Company facility will bring with it 70 full-time jobs. Brad Jaques, CEO of JRS Company, said the company is looking to add 40 with the new facility.

Discussions to bring the California-based manufacturer to Hutto in July, according to Hutto City Manager Odis Jones.

Jones said the city is in discussions with several companies in California to draw their headquarters to Hutto, including at least one company from Silicon Valley, the San Francisco Bay Area technology-hub.

“There’s a lot less cost to run a business here [in Hutto] than in California,” Jaques said Wednesday morning.

City officials are hoping that Hutto’s “business friendly” environment will work to entice companies and their employees away from California. Matt Marshall,  director of Texerra Design and Construction — the construction firm for JRS Company’s new headquarters, said multiple factors played into the manufacturer’s decision to uproot to Hutto.

“They liked a lot of things here – the cost of living, schools and land pricing,” Marshall said.

JRS Company now moves forward with its headquarters’ construction. Marshall stated construction is slated to begin in March after the parties receive the site permit, and Jaques stated the headquarters will be fully operational sometime in September.