A total of 21 precincts, out of 25 total, were included in this projection of election results, with 5.51 percent of registered voters turning out in this election, according to Williamson County.

With 2,102 ballot cast in the early voting period from Nov. 29 to Dec. 12, Hilda leads the race against her counterparts Hollis Bone and John Montgomery (of no relation to Hilda), with 61.03 percent of the votes cast.

A total of 60,880 voters are registered in the city of Round Rock. The roughly 2,100 ballots cast represents a voter turnout of 3.45 percent.

Whitfield left her seat vacant, effective Oct. 6, to move to Wyoming to a vacation home. On Oct. 26, Round Rock City Council voted to declare a special election for Dec. 16. Since that time, three candidates filed for the position.

Bone announced first, prior to the election being called. Bone previously ran for Round Rock City Council Place 1, which was vacated by Craig Morgan who ran successfully for mayor. Bone lost to current Council Member Tammy Young. Bone previously served on the Planning and Zoning Commission and was involved with the Round Rock Economic Development Partnership and the Transportation and Economic Development Corporation, according to his campaign website.

John owns printing company Roberts Printing. He has lived in Round Rock for just under seven years, according to his campaign filing form.

Hilda previously ran for mayor in this year’s May election and lost to Morgan. Hilda said she has lived in Round Rock for nearly 17 years after being recruited to the area by Dell.

Results will be updated as they come in.
SHARE THIS STORY 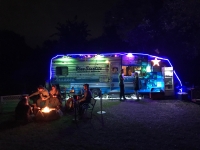